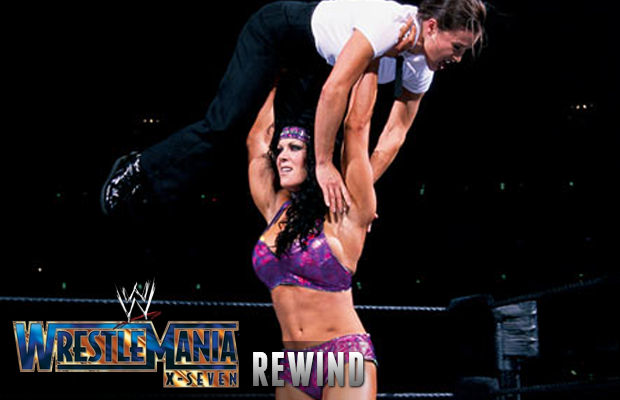 This Sunday at WrestleMania 31, Brie and Nikki Bella team up to take on AJ Lee and Paige.

All week leading up to the big night, we’re revisiting the most memorable women’s wrestling moments in WrestleMania’s 31 year history, tackling a total of 25 WrestleManias.

The seventeenth WrestleMania brought with it every kind of drama imaginable.

Later, Lita made her presence felt in the second-ever TLC match, trying to help Matt and Jeff Hardy defeat the teams of Edge and Christian and The Dudley Boyz to win the WWE Tag Team Titles. Team Xtreme was unsuccessful, but the punishment they doled out (and endured) made the match an instant classic.

Lastly, a McMahon family blow up allowed Trish Stratus to have an epic moment of her own, turning on Vince McMahon with a thunderous slap. She also brought Vince’s estranged wife Linda to ringside so she could shock the world by coming out her catatonic state and kick Vince in the grapefruits. Stephanie McMahon, still loyal to her father, brawled with Trish in an attempt to get revenge, but it wasn’t enough to save her father from humiliation, as he was eventually defeated by his son Shane.

Watch the matches below:

What are your memories of these moments?