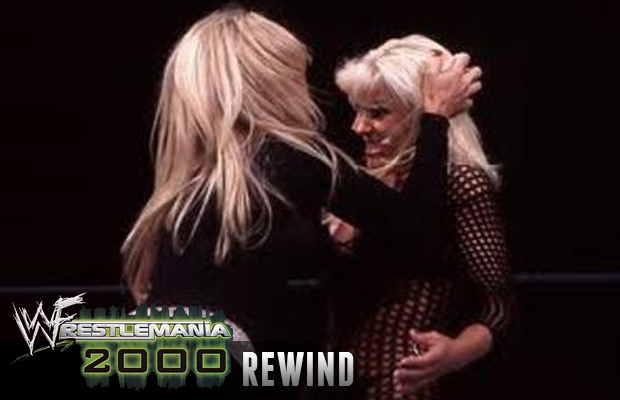 This Sunday at WrestleMania 31, Brie and Nikki Bella team up to take on AJ Lee and Paige.

All week leading up to the big night, we’re revisiting the most memorable women’s wrestling moments in WrestleMania’s 31 year history, tackling a total of 25 WrestleManias.

The sixteenth WrestleMania saw the women of the WWE play a number of different roles throughout the night.

First, Terri Runnels and The Kat sought to settle the score in what was officially dubbed a “Catfight”. Val Venis served as referee while legends The Fabulous Moolah and Mae Young stood in Terri and Kat’s corners, respectively. Terri won the match thanks to some inadvertent help from Mae, who planted a kiss on the unwilling Venis.

Later, Chyna team with Rikishi, Scotty 2 Hotty and Grandmaster Sexay to take on The Radicalz: Chris Benoit, Dean Malenko, Eddie Guerrero and Perry Saturn. Chyna would win the match for her team, pinning Guerrero after putting on a dominant show.

In the night’s main event, the McMahons found themselves at odds, each of them representing one of the competitors in a Four-Way Elimination match for the WWE Championship. Stephanie McMahon accompanied her husband Triple H, Vince McMahon sided with The Rock, Shane McMahon allied himself with Big Show and Linda McMahon stood in the corner of Mick Foley. In the end, it was Stephanie who was triumphant, Triple H winning and retaining the title.

Watch the matches below:

What are your memories of these moments?