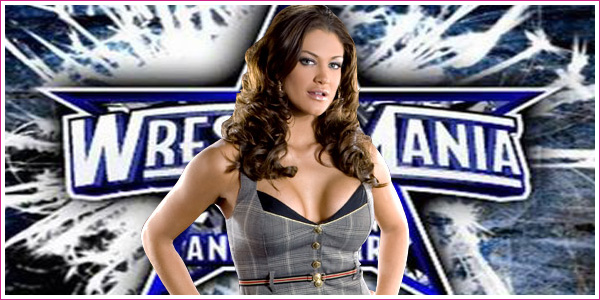 With the Divas Battle Royal at WrestleMania 25 quickly approaching, Diva Dirt has decided to take a closer look at each of the known and rumored participants in the matchup and assess their odds of winning as being High, Moderate, or Low. The winner, of course, will be crowned the first ever â€œMiss WrestleMania.â€ This is a new feature that will take place right up until the big day in Houston, TX on April 5th, 2009 and will be covered by yours truly, the â€œMouth of the South,â€ Hassan! I will save my prediction for the winner as the very last WrestleMania Spotlight profile I do. Be sure to leave your opinion in the comments! Letâ€™s get right into itâ€¦ presenting SmackDown Diva Eve Torres!

Diva: Eve Torres
Real Name: Eve Torres
Hometown: Denver, Colorado
Birthday: May 5, 1984
Brand: SmackDown
Height: 5’8″
Weight: 131 lbs.
Finisher: Handspring Back Elbow Smash
WWE Debut: February 1, 2008 edition of SmackDown
Career Highlights: 2007 Diva Search Winner, appeared in Latina and Muscle & Fitness magazines and an episode of Sunset Tan, a Million Dollar Dancer on Show Me The Money, guest-starred in Days of Our Lives, The Drop, and The Underground, was on the LA Clippers Spirit Dance Team, USC Fly Girl
â€œDid You Know?â€ Fact: Eve can solve a 3 x 3 x 3 Rubik’s Cube in under 5 minutes, as demonstrated when she appeared on The Best Damn Sports Show Period in November 2007. She is also trained in Jiu-Jitsu and holds a blue belt

Eve Torres came onto the scene with the 2007 Diva Search, which many are speculating could be the last Diva Search that the WWE holds (though I doubt it). After winning the competition, Eve was sent to OVW in January of 2008 to begin her wrestling training, instead of being sent straight to the ring with no experience (cough).

Her literal in-ring debut came on Raw when she appeared in the 16-Diva tag team match. Her team lost, but she was never even tagged in, so it’s hard to count that. Aside from participating in the SmackDown Divas Contest, the Lumberjill Match at WrestleMania 24, and the Costume Contest at Cyber Sunday 2008, Eve has been seen on SmackDown, but only backstage as an interviewer. Her first storyline involved Michelle McCool‘s heel turn, when she was attacked in the ring. This led to her first real in-ring debut, where she lost to Michelle. The feud continued with Eve tagging with Maria to take on Maryse and Michelle, where her team lost again. The Divas Battle Royal will be Eve’s third official matchup.

I don’t think anyone is going to make bets on Eve for WrestleMania. I will, however, say that she is definitely my pick for the “one to watch.” Last year, I made this prediction about Maryse and look where she ended up! Eve really just doesn’t have the experience or an in-depth character just yet to win such a big match. There are other Divas on the roster who are going to be put over and last longer than Eve. Sure, it’s just the title ofÂ  “Miss WrestleMania,” and they might as well give the winner a tacky pretty crown too, but right now is just not Eve’s time.

She’s presently serving as Maria’s BFF and basically getting her butt kicked in the ring by Michelle and Maryse just for being that (can’t say I blame them!). But I will point out that even though Eve’s only been in the ring twice, she’s much more enjoyable to watch than her BFF counterpart. She is trained in Jiu-Jitsu, kickboxing, and she is an accomplished dancer, so she was never completely brainless about being an athlete and it shows in the ring. She looks to me like she has the drive to make it, but she just needs time to polish it up. No one starts out amazing right off the bat, except me ;) , so that’s why I think Eve is definitely going to improve and rise up. She’s already got a pretty good moveset, she can hold her own weight, and she can carry a match. I think it’s all the ingredients to make a success story, but unfortunately, it won’t be at WrestleMania.

Eve’s Odds of Winning On The Hassan-O-Meter: Low