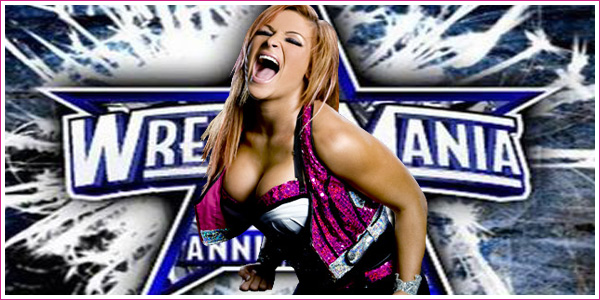 With the Divas Battle Royal at WrestleMania 25 quickly approaching, Diva Dirt has decided to take a closer look at each of the known and rumored participants in the matchup and assess their odds of winning as being High, Moderate, or Low. The winner, of course, will be crowned the first ever â€œMiss WrestleMania.â€ This is a new feature that will take place right up until the big day in Houston, TX on April 5th, 2009 and will be covered by yours truly, the â€œMouth of the South,â€ Hassan! I will save my prediction for the winner as the very last WrestleMania Spotlight profile I do. Be sure to leave your opinion in the comments! Letâ€™s get right into itâ€¦ yeah baby, it’s SmackDown/ECW DivaÂ Natalya!

Another day, another misused Diva. If there was one Diva on the roster that I would really want to win this match, it would be Natalya. She has such a great character and is so talented in the ring that having her as her boyfriend’s manager on ECW seems like a waste of talent and a paycheck. She doesn’t even really play a vital role in Tyson’s matches besides cheering him on and occasionally exchanging some words with Alicia Fox or Katie Lea.

As the daughter of Jim “The Anvil” Neidhart and Ellie Hart (the daughter of Stu Hart), Natalya was practically born into the wrestling business and it is in her blood. She came onto the wrestling scene in 2000-2001 where she served as host and ring announcer for Eric Bischoff’s youth promotion, MatRats. In 2003, Natalya entered the ring for her family’s organization, Stampede Wrestling. In 2004, she head over to wrestle in England and Japan. She returned to Canada in 2006 after suffering a torn ligament in Japan, where she first picked up her heel status. Natalya signed a developmental deal with the WWE in 2007, and made her debut in OVW on July 18, 2007 accompanying Teddy Hart and Harry Smith in their tag team matches as the new Hart Foundation. In October of 2007, Natalya went to FCW to further her training.

Natalya made her WWE debut on SmackDown, where she came to the aid of Victoria by attacking Michelle McCool and Cherry. Once the Divas Title was announced, Natalya was the first Diva to qualify for the title match, though she lost to Michelle at the Great American Bash. Following that loss, Natalya sporadically competed in matches while also appearing in FCW alongside Tyson Kidd. She made her debut on ECW with Tyson Kidd on Februay 10, 2009 and competed in her first ECW match against Alicia Fox on March 3, 2009, which she won.

If Natalya had been doing something more worthwhile than serving as a valet to her boyfriend on ECW, I’d have high hopes for her in this match. However, since the WWE is so notorious for putting the more talented Divas in less meaningful positions, I don’t see Natalya winning this. I do predict her to be a huge force to deal with, and I really hope there is a Beth Phoenix/Natalya confrontation as I’d love to see those two go at it. If Trish is the final participant in the match, then surely these two Canadians will go at it, which would definitely be a treat. However, our poor Natalya is being reduced to such a little position and not contributing a whole lot other than getting a decent Divas division going on ECW. Hopefully if Nikki Bella comes to ECW and Tiffany finally starts getting in the ring, we’ll see more of Natalya, which is certainly where she needs to be… in the ring, kicking butt, and taking names. Maybe if WWE were smart, they’d use this opportunity to let Natalya win and put her back on the map and in the hunt for some Championship gold since she is certainly very capable of winning the Battle Royal… but don’t get your hopes up on that happening.

Natalya’s Odds of Winning On The Hassan-O-Meter: Moderate