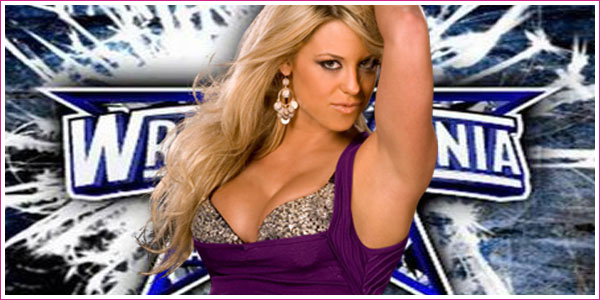 With the Divas Battle Royal at WrestleMania 25 quickly approaching, Diva Dirt has decided to take a closer look at each of the known and rumored participants in the matchup and assess their odds of winning as being High, Moderate, or Low. The winner, of course, will be crowned the first ever “Miss WrestleMania.” This is a new feature that will take place right up until the big day in Houston, TX on April 5th, 2009 and will be covered by yours truly, the “Mouth of the South,” Hassan! I will save my prediction for the winner as the very last WrestleMania Spotlight profile I do. Be sure to leave your opinion in the comments! Let’s get right into it… first up is ECW Diva Tiffany!

Though WrestleMania 25 will be Tiffany’s first official WWE match (the 16-diva tag match on Raw doesn’t really count…), don’t underestimate the newcomer. She has been practicing hard since she earned a developmental contract back in February of 2008. As a member of FCW’s roster, she doubles as both a ring announcer and a wrestler, where she has beaten the likes of such Divas as Wesley Holliday in singles matches as well as Rosa Mendes and Alicia Fox in tag team action.

However, her status as a newcomer will definitely factor against her. While she is learning rapidly, she still is not as polished a wrestler as other members of the Divas roster. Aside from this, she isn’t really involved in any kind of storyline at the moment other than being Teddy Long’s assistant, so there’s no real reason the Creative Team has to let her win unless they want to pull out a huge upset, which I just don’t see happening. She is my hometown girl and fellow classmate (which is why I did her first), but I don’t expect her to have a huge role in this match, although I don’t think she’ll be the first to be eliminated. Maybe she’ll eliminate Katie Lea or something! One thing that may come of this is that Tiffany may finally become a regular, active wrestler on ECW and not just participate in backstage segments since it seems that the Divas roster on ECW is finally growing.

Tiffany’s Odds of Winning On The Hassan-O-Meter: Low