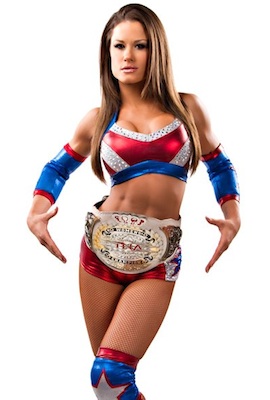 So precise, she wins it twice! Despite taking home the 2011 Diva Dirt Writers’ Choice Award for most improved female wrestler, we felt that Brooke Tessmacher continued to up her game to new levels that overall she deserved to win the prize for the second year in a row.

Last year, Brooke rose to prominence as one half of tag team, TNT, alongside veteran wrestler, Tara. This year, however, she stepped into the limelight as a singles competitor and took a completely different route in targeting the Knockouts Championship. It wasn’t an easy road to get there, but Brooke got her first big opportunity at the company’s May pay per view, Sacrifice, when she and Gail Kim delivered what some fans feel is one of the strongest televised female bouts of the past year.

Despite not leaving with the title that night, both Gail and Brooke delivered, with the latter showing off a variety of new moves we had not previously seen from the Texan native before. She proved a lot of people wrong… but that wasn’t good enough for someone with their eyes on the prize.

The following month, Brooke got one more shot against Gail at Slammiversary, which coincidentally emanated from her home state of Texas. It was there that she scored the big upset and pinned Gail’s shoulders to the mat for the three count to leave as the new Knockouts champion. For someone so new in a roster filled with veteran talent, this was a huge step in her career, and further spoke for how skilled she had become in that she could now hold her own in matches with or without having Tara by her side.

Even though Brooke’s time as Knockouts Champion came to an end, we have no doubt that she can win the title again, and in an even better showing than before. Champion or not, no one can deny the amount of hard work and dedication that shows each time she steps into the ring.

Due to her continuous drastic improvement over the past year, as well as the fact that she’s now able to stand toe to toe with the best of them and not come off looking anything less than a million bucks, we simply could not think of any candidate more deserving for the title of “Most Improved” than Brooke Tessmacher.