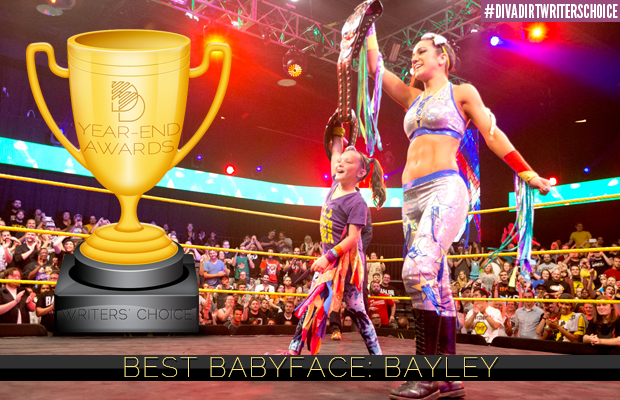 It’s official: Bayley has captured the hearts and minds of the WWE Universe. The combination of her unparalleled resiliency, infectious charisma and Wacky Waving Inflatable Arm-Flailing Tube Men have combined to create an ultimate underdog character that has transformed from light comic relief to a top sports entertainer.

With that transformation, Bayley has captured the attentions of an audience few Divas manage to captivate: children. Like few stars – male or female – she provides a hero they can latch on to without fear of betrayal or disappointment. Bayley, always kind and courageous, will never let them down. She’s the textbook babyface, but somehow, is the most interesting one to come around in some time. It must be the earnestness.

Bayley has managed to engage audiences like no other, with the public creating chants for her that simply cannot be matched. Why does everyone love her so much? It’s down to the fact that she is one of the most captivating performers in Diva history. Not only does she know how to execute moves perfectly (just ask Sasha Banks), she also knows how to portray a story like no other (just ask Nia Jax).

Speaking of those aforementioned Divas, they couldn’t be any more different, but the result was the same for Bayley when she tackled them: a win.

Bayley and Sasha dropped jaws in Brooklyn and then reached unprecedented emotional heights during their history making Iron Man rematch.

Bayley then battled against all odds in London to make Nia Jax tap. Defeating arguably the hottest female wrestling talent in the world and an undefeated behemoth in a matter of months is no easy task. Bayley managed to accomplish it.

Bayley really does have a legion of fans in the palm of her hands wherever the location. Full Sail University’s audience at NXT TV tapings are normally the most enthusiastically rabid, with the infectious Izzy leading the way. Bayley has managed to portray what she stands for in a way unseen in a long, long time. For those who thought Full Sail’s small venue was to be Bayley’s only kingdom, they were wrong. NXT TakeOver: Brooklyn and NXT TakeOver: London proved that Bayley’s appeal is universal.

Whether she was coming up short against Charlotte and Emma, or raising the roof against Sasha Banks and Eva Marie, Bayley knows how to set the crowd alight and bag gold in the process. Hell, she picked up televised wins against 10 different women in 2015, so why wouldn’t you want to root for her?