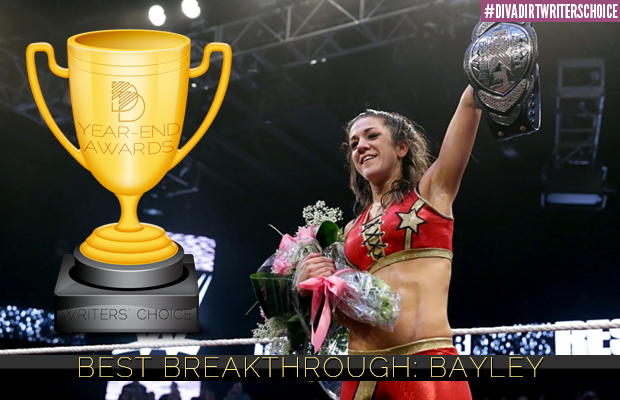 What some could have taken as a disappointment, Bayley turned into the opportunity of her career.

When three of NXT’s Four Horsewomen – Becky Lynch, Charlotte and Sasha Banks – made the jump to the WWE main roster in July, many fans lamented that their spiritual sister Bayley had been left behind in NXT. As it turns out, though, Bayley wasn’t “left behind” – she was put in the division’s driver’s seat.

To emphasize that point, Bayley immediately made a beeline for the NXT Women’s Title, defeating each of her fellow Horsewomen in turn. First, she bested Charlotte, and then Becky Lynch, earning at shot at Sasha Banks’s NXT Women’s Championship in the process.

The match that followed – Bayley and Sasha’s epic, Match of the Year candidate at NXT TakeOver: Brooklyn – became Bayley’s coming out party. She would win the NXT Women’s Title in inspiring fashion, defeating Sasha to thunderous applause.

The moment served unmistakably as a passing of the torch, even before she and Sasha were joined in the ring by Becky and Charlotte. Though, when the four women embraced in the middle of the ring, the emotional moment definitely served its purpose: reminding the fans of the strides each of them had made and the reverence they felt towards the division they had built together. There, Bayley enjoyed the fruits of her labor, being handed the keys to the kingdom. If one woman was to lead NXT’s Divas division to its next great era, it could only be the hard working, supremely talented and big-hearted Bayley.

If NXT’s faith in Bayley wasn’t apparent then, it was in her next big challenge: headlining a TakeOver special. She and Sasha went head-to-head in a Brooklyn rematch in the main event of NXT TakeOver: RESPECT, competing in the first ever Divas Iron Man match. For 30 minutes, the women did battle, pouring everything they had into the match. Appropriately, after a bout that recalled those fought by her childhood heroes, it was Bayley who stood tall, triumphant and still the NXT Women’s Champion.

Since then, Bayley has cemented herself as the most fighting of all the NXT Women’s Champions, defending the belt against all comers: she bested the vicious Alexa Bliss, overcame the unexpected challenge of Eva Marie‘s support in “corporate” and, finally, handed the unstoppable Nia Jax her very first loss, forcing the formidable Diva to tap out at NXT TakeOver: London.

By now, it’s clear that Bayley will defend her belt against all comers, big or small, experienced or not. Though Bayley’s lion heart has always been on display, it wasn’t until this year that she got the chance to roar.