WSU Blood and Thunder in Review: The More Things Change… 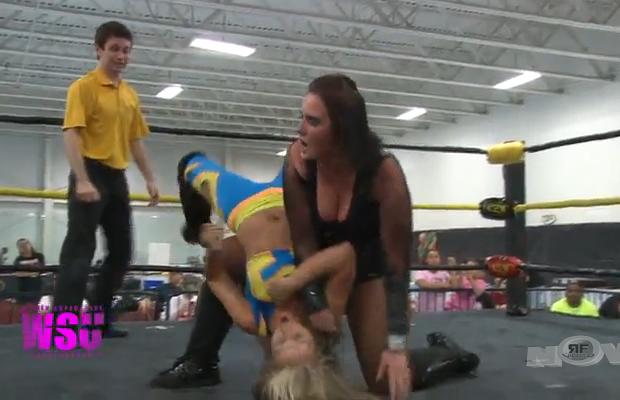 After a year of waiting, Lexxus‘s WSU World Championship dream came to an unfortunate end as Jessicka Havok once again reasserted her status as WSU’s hottest property.

The stars seemed aligned for Lexxus – this was one day shy of a year removed from their previous championship match, a three-way contest which also featured Alicia, and  which ended with Havok picking up the win – but Alicia taking the fall, not Lexxus. Not only was this a prime opportunity to tie up loose ends, but it came on the night WSU were set to announce their new co-owner and enter the promotion’s next era. Change was in the air!

Lexxus looked ready to seize the moment from the second the bell rang, not holding anything back and unleashing flurry after flurry of offense at a Havok who could do little to prevent the one-track-minded assault of Lexxus early on. Though the match became more evenly-contested towards the end, Lexxus was able to use the disparity in the two women’s sizes to her advantage, using speed and precision to keep Havok under control. However, the final stages of the match saw Havok’s sheer strength and resilience shine through, mustering up the power to block Lexxus’s barrage of strikes and land a devastating Air Raid Crash to retain her championship.

After the match, none other than CZW owner DJ Hyde came to the ring, declaring himself the new co-owner of WSU and announcing some improvements to be made to the promotion on his watch, such as an all-new WSU website (finally!) and the streaming of all WSU events on iPPV. As he presented Havok with her championship, however, she replied with a kick to the stomach and another Air Raid Crash, hitting home a message to Hyde that no matter who’s in charge, Jessicka Havok will be THE key player in the new era of WSU.

As if that wasn’t enough, two of the most terrifying women in all of women’s wrestling waged all-out war with each other, as Mickie Knuckles took on former SHIMMER Champion Saraya Knight in a No Disqualification, Fans Bring Weapons, Falls Count Anywhere match! Some creative gifts from the New Jersey crowd – including a miniature guitar, a computer keyboard, a staplegun and a baseball bat covered in tacks – really brought this match to another level, both women taking some sickening shots to the head with whatever was available, and not even making it to the ring until about eight minutes in! After some brutal weapon use, the finish came relatively cleanly as Mickie was able to land a sit-out pumphandle slam on Saraya to pick up the victory, the pair receiving a standing ovation for their efforts after the match.

It was a testament to the overall quality of the event that neither of those contests were the match of the night. That accolade goes to Kimber Lee and Allysin Kay, who put on a wrestling clinic that, though short, was intense and unfettered from bell-to-bell, exchanging strikes, German suplexes and a whole lot more before Kimber hit the Code Red for the win. A superb performance from two women whose 2013 has seen them both reach dazzling new heights in wrestling.

Scottish wonder Nikki Storm has greatly impressed every audience she’s wrestled in front of so far in her US tour, and last night was no exception, taking on Jenny Rose for the first time in another international dream match. From her trash talking to her mannerisms to her aggression and ability in the ring, the way Nikki Storm delivers herself verbally and physically is a joy to watch, and the pair wrestled an excellent match in which Rose came out victorious, submitting Storm in innovative fashion, and ensuring she returns to Pro Wrestling Diana in Japan with momentum on her side.

Another European star on the card was “Portugal’s Perfect Athlete” Shanna, who faced Leah Von Dutch, a woman she’s wrestled numerous times this year in the UK for promotions such as EVE, in the show’s opener. With Chris Dickinson accompanying her at ringside, she was able to use the numbers game to use the numbers game to her advantage, taking Von Dutch with a brutal double stomp from the top rope to kick off the night’s proceedings with a thud.

Elsewhere, enigmatic rookie Hania (Saturyne sans the mask, but I didn’t tell you that) answered Cherry Bomb‘s open challenge, defeating her with a moonsault in a solid match as the Twitterverse exploded in frustration trying to work out how to spell this new talent’s name (Hania? Janiya? Hanaya?), and Marti Belle retained her WSU Spirit Championship against Ezavel Suena in a decent but forgettable contest that picked up in excitement after the winning bell, as Suena attacked Marti in frustration, and Marti responded in kind by challenging her to a Championship vs Mask match at a later show. Also, Nevaeh and Christina Von Eerie defeated Veda Scott and Jessie Brooks in a tag match that, though fine, felt forced and struggled to keep my attention.

The show wasn’t without its misfortunes. An otherwise excellent, frenzied, blink-and-you’ll-miss-it six-woman tag match that saw Jodi D’Milo, Barbi Hayden and Jessie Kaye defeat Santana Garrett, Xandra Bale and Jewells Malone was tainted by the news shortly afterwards that Xandra Bale had suffered an ankle injury during the match. No updates as of yet about the severity of the injury, but we wish Xandra all the best and a speedy recovery!

All in all, however, this was a fantastic show. WSU over the past year or so has become somewhat of a prodigal daughter in women’s wrestling – despite its takeover last year by Drew Cordeiro of Beyond Wrestling, it has lacked creative direction and struggled to put on and promote shows. This, however, was a throwback to the WSU of old, with solid booking and an array of superb in-ring performances in matches that seem to have a real sense of purpose once again. With the roster they have they are more than capable of making serious inroads in the coming months, while the introduction of overseas stars will add variety to the shows while increasing the company’s international appeal. DJ Hyde promised change, and if Blood And Thunder was anything to go by, it looks like we’ll get it!