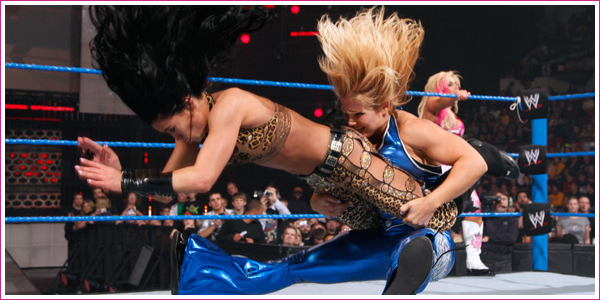 The SmackDown team may have been led by WWE Women’s Champion, Michelle McCool but it was the newest addition to the roster that was a blue beacon of success for the brand. Decked in SmackDown colours, a royal blue Glamasuit [as we have affectionately started calling them], Beth Phoenix Glam Slammed her way to victory and had a helping hand in SmackDown taking the Bragging Rights trophy last night.

To the beginning now, let’s take a look at the match as it happened… Team SmackDown make their entrance first with the Women’s Champion debuting a new piece to her attire — a robe. Proving she can do nothing right, this one has already hit a sore spot on the interwebz with “AJ Styles rip-off” comments. Mmm… trivial. Meanwhile, Beth Phoenix is looking mighty Glamariffic in royal blue. While Team SmackDown have opted for eye-popping colours like royal blue, emerald green and hot pink, Team Raw are much more subdued in their colour choices.

We kick things off with Beth Phoenix and Gail Kim, in something of a dream match. Beth starts off with a kick to the gut followed by the Divas exchanging forearms. The crafty former Women’s Champion, Gail Kim goes for a mid-rope crossbody but is caught but the powerful Phoenix. Gail manages to flip things over into a pin attempt but Beth kicks out. The Glamazon begins woman-handling Kim before Michelle McCool blind-tags herself in. Gail manages to subdue the Champ with a lovely hurricanrana that is sold well by McCool, who then cowers into her corner allowing Natalya the tag.

Another dream match here; Nattie vs Gail. The physical third-gen Diva slams Gail to the mat. As things progress Gail hits her lovely launch through the ropes on Natalya followed by that unorthodox jumping butt bump. Kelly Kelly is then tagged in to the biggest pop so far, Kelly works well with Nattie and keeps the pace up with a twilt-a-whirl hurricanrana. Natalya then hangs Kelly on the ropes, showing her prowess. Natalya, with her brute force, drives Kelly into the corner and begins kneeing her. This all looks rather ferocious which is perhaps the biggest difference between Natalya and the Glamazon; while both share powerhouse quality — there’s nothing pretty about Nattie’s offense while Beth is a little more Diva-esque. In the corner, Kelly goes for a sunset flip but to no avail as Michelle tags in. After a short exchange, in comes Beth as Team SmackDown begin their ‘wear down’ of Kelly. Kelly makes a desperate effort to tag in Melina or Gail but the powerful Beth manages to drive her back to the Team Blue corner. Michelle is back in now and hangs in there with her team mates, throwing Kelly around like a rag doll. Beth Phoenix then blind-tags herself in much to McCool’s shock, Kelly begins fighting back with a hurricanrana into a rollup but Beth kicks out. Kelly with a jawbreaker on Beth and finally hits a tag to Melina.

The fiery Divas Champ is reunited with her old rival now with forearms and kicks. Beth picks up Melina by the throat, but Melina nicely manages to kick herself out of the position. The banshee-like Melina then quickens the pace as she drop-toe-holds Beth onto the middle rope followed by her patented knee-smash and then hair-smash. The match now begins to hit it’s stride as Melina knocks Michelle off the apron, meanwhile the Glamazon comes back with a shot to the stomach followed by a springboard suplex that Melina counters into a small package. A distraction from Natalya and Gail allows Michelle to get into the ring and roll over the Divas with Beth now on top but Melina kicks out. Melina is thrown into the ropes but then goes for a hurricanrana but then modifies it into another face-smash to the canvas.

The Divas Champ goes for the pin but Natalya and Michelle come in and break it up, and cue end-of-match melee. Gail hits a clothesline on Nattie, Kelly hits a dropkick on Michelle. In the ring, Beth throws Melina into the corner, Melina attempts to jump overhead but is caught by Beth. Not sure what’s going on here, but I guess Melina’s head was supposed to meet the turnbuckle… it doesn’t. Anyway, Beth then sets up the Glam Slam and leads her team to victory.

Thoughts on the match: Very good. Well put together, with every Diva getting decent ring time and well executed, minus perhaps that end spot with the turnbuckle. I felt every Diva held their own and played their part well. For a pay per view effort, I think this is in line with Hell in a Cell and the two Melina-McCool matches of the summer, as being solid efforts on pay per view. The match had a good length that allowed the drama to unfold and didn’t end too quickly or abruptly unlike many Knockouts matches in the past months. The timing was just right.

Considered the weak link going in, I think the layout of the match worked to Kelly Kelly’s advantage and she was used in a role that was believable, playing the underdog that is beaten down by Team SmackDown before getting a hot tag. That process of Natalya, Beth and Michelle all taking turns to subdue played nicely in tagging Melina into the match for the first time. This was where I felt the match picked up and the exchange between Beth and Melina was good, Melina perhaps had the spot of the match with the modified hurricanrana into the face-smash.

The ending leads to many questions and booking wise, I’m not sure how logical it was to have the Divas Champion lose clean to Beth Phoenix, who isn’t even the #1 heel on SmackDown. Not the ending I would have gone for personally, but it does go to show the extent to which WWE cares about it’s Divas that they never feel the need to ‘protect’ anyone. No doubt, they’ll likely have Melina back and acting like nothing happened on Raw.

Either way, the work was good and I enjoyed it. A solid effort. 3/5