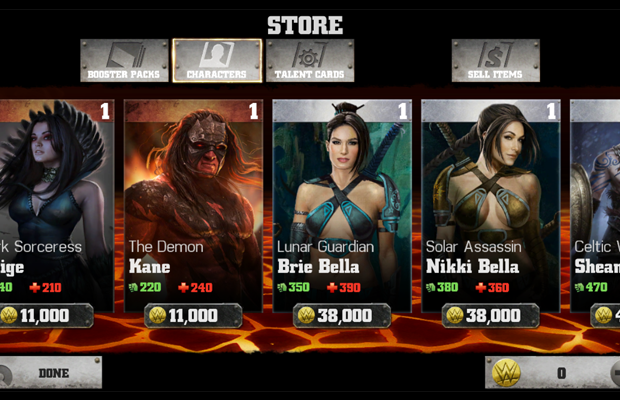 As of now, the Mortal Kombat-style fighting game’s Diva roster can only be unlocked using in-game currency that can be purchased or earned by playing.

Divas included in the game include Brie Bella (in Ice Witch and Lunar Guardian) Nikki Bella (in Pyromancer and Solar Assassin), Paige (in Dark Sorceress and Banshee Knight) and Trish Stratus (in White Witch and Angelic Knight).

Talent Cards, playable during fights, include Paige’s “Dark Magic”, “PTO” and “Banshee’s Cry”; the Bellas’ “Authority Issues”, “Beautiful and Dangerous” and “Twin Magic”; and Trish Stratus’s “Spotlight”, “Fan Favorite” and “Lita“, which brings in Lita as a tag team partner.

View screen caps of the characters and cards below:

Have you played the game yet? What do you think?