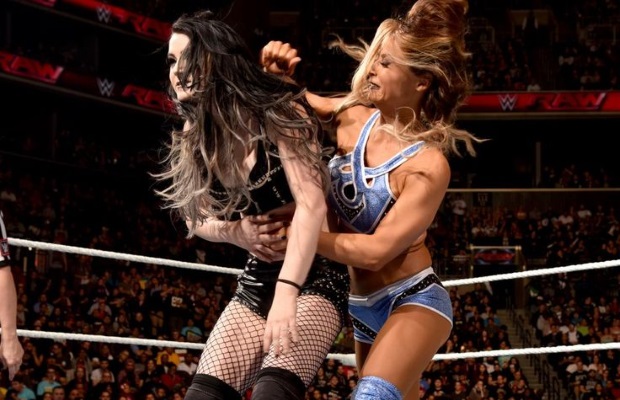 Us fans of womens wrestling in the WWE were treated to an extra golden nugget of action this week, a singles match between Paige and Emma on WWE Main Event. ME has been Paige’s regular home over the last few months, and Emma even reappeared on the main roster scene on this show a fortnight ago. Seems like a fitting place for them to clash again right?

Apologies for the video everyone! At least the match has been uploaded. Shame WWE don’t upload high quality images from Main Event or Superstars, or even acknowledge them on their website, so I had to take a picture of Paige and Emma’s Raw match from two weeks ago. Nice of WWE to make it so easy for me to make this post look polished!

Thoughts: Emma can basement dropkick like no other. Every time she clocks someone in the face with one, it’s like they were hit by a car. Her viciousness is so refreshing; we’ve not seen offense this sharp and brutal since Alicia Fox was a fully fledged psychopath. Whether it was throwing Paige to the outside where she clipped her back on the apron or introducing Paige to her new frenemy, the barricade, Emma proved that she really is once of the best at delivering believable offense.

The match itself was a fantastic length and went on quite a while before a rest hold came into play. Even when one did, it was a full nelson and not a basic chin lock. Emma had the submission locked in a variety of positions, even transitioning it into a butterfly suplex at one point.

I definitely enjoyed this match, although the spot calling was quite noticeable again unfortunately. WWE clearly doesn’t edit Main Event because I’m sure they could change audio levels at certain points, which would really help. Why they choose not too is bizarre to me. Anyway, that’s the only negative I have to say regarding what was a lengthy, hard-hitting and spirited performance by both girls. I liked what I saw, and wouldn’t mind seeing it again. Maybe the WWE Women’s Championship could push these two to the next level?