WWE Over the Limit Review: Driving in Neutral 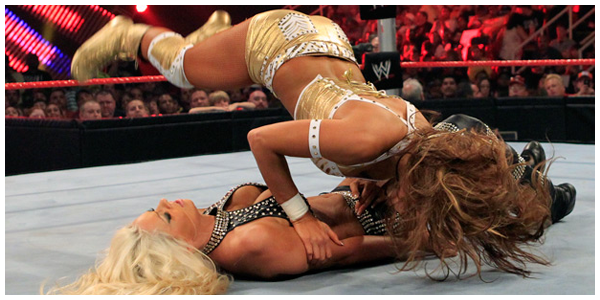 You probably saw the commercials for Over the Limit, featuring fast-moving race cars juxtaposed with various wrestling footage. Of course, this was meant to send the message that this event will be chock-a-block with intense, non-stop action. But as we’ve learned many, many times before, commercials lie (What, you mean there isn’t a giant white rabbit looking to steal my Trix cereal?), and this Pay-Per-View as a whole proved that, and the Divas Championship match between Eve Torres and Maryse, as it turns out, wasn’t much different. Watch the match below and see if you agree:

The Divas start the match face-to-face, talking a little trash. Maryse tosses up her hand and Eve slaps it away. Maryse kicks her in the knee, and the action begins. Maryse tosses Eve into the corner, her shoulder hitting the exposed ringpost. She lays a few boots into Eve before going for an early pin, getting only a 1-count. She slams Eve face-first into the mat and continues to horse around with her, going for a Camel Clutch. Eve fights out at first, but Maryse eventually pummels her enough to lock it in.

Maryse gets into a standing position and Eve elbows her a bit before being let go, eating mat in the process. Maryse bends Eve’s back against the second rope, yanking her by the hair. The referee makes her let go, but Maryse then takes advantage of Eve’s prone position by knocking her through the ropes and out of the ring. Maryse stalks Eve to the corner and preps for a kick, but Eve moves at the last second, leaving Maryse’s foot to make contact with the steel pole. She screams and tries to get away, but Eve catches her and tosses her back into the ring. Maryse misses a clothesline and Eve goes on a tear of offense, stopped by a slap from Maryse.

Eve reverses and irish-whip and slams Maryse to the mat, setting her up for a well-executed standing moonsault. She goes for the pin, Maryse kicks out at 2. Eve goes for another pin following a sunset flip, but Maryse kicks out again, punctuating it with two boots directly to Eve’s face. Maryse goes for a pin of her own (And the crowd goes wild.. Gee, I wonder if it has to do with the position of it?) but Eve kicks out. This pisses Maryse off, and she yells at the referee to do his job (Meaning cheat at your job and count faster, I guess?). She becomes a bit unhinged and shows signs of a more interesting character than the “me sexy, you not” thing she’s been working with for so long. I’m not saying she needs to become a full-on basket case, but they could show her slowly losing a bit of her sanity in her desire to regain her title. Just a thought..

Eve battles back and Maryse holds onto the ropes to gain refuge. The referee makes Eve relent, and Maryse walks right into a reverse face plant. Eve goes for another pin, but only gets 2. Maryse tries to battle back but Eve kicks her in the face and positions her for a somersault splash. Eve pulls off the move, but Maryse pulls up her knees at just the right moment and nails Eve in the back. Both Divas try to regroup, and Maryse gets her bearings first, setting Eve up for the French Kiss. Eve blocks the move and sets her up for a new move, in which she stands over Maryse’s neck and slamming her face-first to the mat by dropping to her knees. It’s a silly looking move, and barely looks effective, but wouldn’t you know it? It’s enough for Eve to get the pin, the win, and retain her Divas Championship.

It wasn’t a bad match, but clearly didn’t reach its potential. It was like (if I may overuse the car metaphors) driving in neutral, so to speak–you’re moving, but you’re not making use of the engine. You’re basically coasting. This match, in the grand scheme of the feud, was coasting on the excitement of the past few weeks instead of utilizing it to put on a fiery, exciting match. The moves weren’t there to tell a story or build to an exciting climax–they (to me) merely brought them from point A to point B to point C and so on, and that makes for a match that’s more “going through the motions” than “showstopping”.

I mean, one of the loudest crowd reactions the match got was when Maryse went for the suggestive pin attempt. That says a lot about the match’s placement in the event. It’s not fair to put the Divas in the “death slot” between main events, because they get so little respect from the live crowd as it is, and putting them between two hotly anticipated matches will only make the crowd wish for it to be over ASAP. When a cheesy pin attempt is one of the few things that will get them to react, it proves that the WWE is making the Divas fight upstream when it comes to engaging the audience with this match. I’ll say it again–it’s not fair.

Still, this match wasn’t exactly the type of non-stop excitement that elicits really big crowd reactions, and it makes me wonder if they’ll be able to pick up the excitement as this feud moves on, because I’m beginning to doubt that Eve and Maryse have a show-stopping match in them. If that’s the case, the most compelling part of this feud will undoubtedly be taking place outside the ring, and it’s possible to make a satisfying feud out of that. You just have to do it carefully and utilize both girls to their potential. Eve can get the crowd behind her relatively easily using Maryse’s outlandish behavior. Maryse, as I suggested above, can become a bit unhinged in frustration at losing to Eve and pull some crazy stunts to get back to her. Of course, that could go over-the-top easily, but that’s what wrestling is a lot of the time–walking that fine line between quality and excess.

Despite my reservations, I really believe that these girls have a great match in them. This feud only seems to be getting started, and hopefully they can have much more fitting big-stage match at some point in the summer. This match only felt like a stepping stone, a forgettable step in their feud. I’m sure this match only took place because a PPV happened to come at this point, because it didn’t feel right that they were already at this stage within the pacing of this feud. They’ve been feuding for a while, yes, but it’s only just started to really get moving. Maybe later on in the summer they can pull off a match that actually reflects the intensity they’ve been showing outside the ring. But the question remains: can they keep the flame burning long enough for that to happen?