WWE Superstars Redux (February 14th, 2013): Sharpshooter vs Spear, Which Should Be Most Feared? 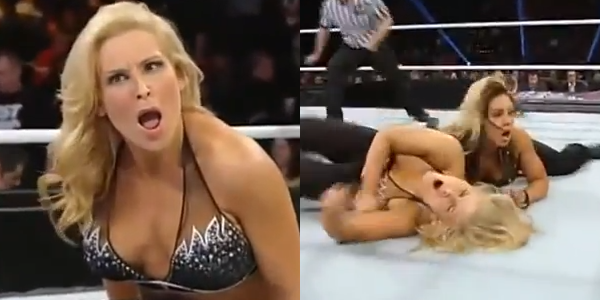 What’s up Diva fans and welcome to a slightly belated edition of this week’s WWE Superstars Redux. This is the first Divas match on Superstars in nearly four months, and the last match saw Beth Phoenix go one-on-one with Kaitlyn. This time around, Kaitlyn is back on the international/internet show with the Divas Championship over her shoulder and she’s grappling with another former Diva of Doom, Natalya. Can Nattie insert herself into the title picture or will Kaitlyn get a confidence boosting win before her big match with Tamina at Elimination Chamber? Let’s have a look!

The screeching guitar riff associated with all the Hart family proudly airs throughout the arena as out first is Natalya. Justin (I hope he doesn’t have a tie on) Roberts then announces “her opponent” and to my surprise, Kaitlyn’s entrance has been cut from the video! Apparently though, her entrance was cut from the broadcast, so maybe that’s a sign that even WWE are sick of her ‘Spin The Bottle’ theme song? Just kidding, I actually quite like it, but to be honest, that means nothing as I have four Rebecca Black songs on my iPod (other MP3 formats also available). Unfortunately, things have changed in the last four months on Superstars and NXT commentator Tony Dawson is at the announce booth alongside Matt Striker now, so if I miss something useful said by the commentators, that’s because I’ve muted the video. Ring the bell!

The match gets underway with Kaitlyn applying a reverse waistlock on Natalya, the latter of which quickly gets out of it, heel trips Kaitlyn and then applies a leg lock. Kaitlyn uses her own lovely legs to smother Tal’s face, which makes the Dungeon Diva break the hold. Next after a bit of fanfare, Natalya goes low on Kaitlyn, but the Hybrid Diva blocks Nattie’s attempt at a move and locks on a headlock, which she then transitions into an armbar. Natalya makes it back to a vertical base so in an attempt to push her back down again, Kaitlyn reverts back to a front headlock. Nattie then spins out of the move and hits a nasty looking wristlock takedown, which Kaitlyns sells quite well, as I’m not sure if it’s her arm or her face that’s hurting.

The daughter of Jim ‘The Anvil’ Neidhart lets out a trumphant “YEAH” before knocking Kaitlyn’s lips off with her killer Nattie-by-nature clothesline. Natalya then goes for a nonchalant cover by sitting on Kaitlyn but after a two, Kaitlyn launches the Queen of Harts off her like a rocket, and Natalya is sulking after that hard fall on her backside! Natalya looks like a woman scorned, or a woman who’s just let out an embarrassing fart and thank god that she is no longer in that gimmick, because it stunk. Literally.

Natalya is still on the warpath and decides that one of the superb submissions that she has up her sleeve should be used next. Kaitlyn tries, but fails to avoid a surfboard being locked in, and the camera zooms in on Kaitlyn’s face as she grimaces in pain. However, the Champ is gritting her teeth and is refusing to tap out, and I’ll pretend that has something to do with her strong will, as opposed to being physically unable to tap out due to the fact Natalya is wrenching her arms back. Nattie releases the hold by forcing the Divas Champion’s face into the mat. Natalya smacks her hands together, admiring the good work that she’s done thus far, but the job isn’t done quite yet, so the Canadian export dishes out more damage by ramming Kaitlyn into the corner.

The ‘Punjabi Princess’ according to Tony Dawson (I think she has to be Punjabi to be referred to as that) is then forced out of the corner by the official but she isn’t interested, and walks right into a stiff kick from Kaitlyn. The ‘Hybrid Diva’ then vaults from the second rope and goes for a sunset flip, which Natalya immediately reverses. Nattie is going for the Sharpshooter but Kaitlyn’s strength comes into play and she manages to crawl her way to the ropes. Natalya then perhaps has her stalling suplex on her mind but before she can think any further, Kaitlyn proves that she’s a step ahead and gets a two-count after a small package. Kaitlyn then tries to end the match as soon as possible with a Gutbuster, but her opponent slides down her back and knocks her to the ground – can Natalya finally lock in the Sharpshooter. No, is the answer as Kaitlyn boots Nat off of her. Great Khali’s bit on the side/soul-mate/life partner then tries for the discus clothesline once again but the savvy Champion ducks it and steamrolls Natalya with a spear for the victory!

Thoughts: This was a nice little match that makes things slightly more interesting going into Elimination Chamber. With Kaitlyn getting a win as well as Tamina this week, the playing field is level, yet I still see Kaitlyn retaining come Sunday. Whilst Kaitlyn and Nattie don’t have as good chemistry as Nattie and Alicia do, it was pleasant to see Kaitlyn facing someone other than Aksana. All in all, the match didn’t break any ground but it served it’s purpose; it was entertaining and Kaitlyn looked strong going into Elimination Chamber. And with that, stay tuned, Jack will be back!