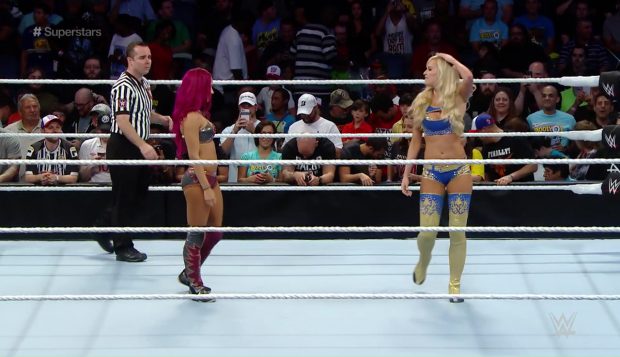 This week on WWE Superstars, fans were treated to the second match up in Sasha Banks and Summer Rae‘s budding feud. The two former BFFs have been colliding since Sasha’s recent return to the ring earlier in the month. This week, there were not any lengthy promos between the two adversaries, rather we headed straight into the action.

Summer shows her disdain and lack of regard for the Boss by starting the match up with shoves to the face. Not one to take disrespect well, the cagey boss quickly sweeps Summer’s long, dancer legs to gain control in the match up. Sasha hits a top rope arm drag and double knees to the corner before going for the first pinfall of the bout, resulting in a one count. Summer manages a school girl reversal to Banks, gaining a strong foothold early on in the contest.

Summer maintains dominance of the match for the next several moments, showcasing her signature foot choke hold and leg drop. An attempt to rally by Banks is quickly thwarted by a kick to the midsection from her opponent. Capitalizing on Summer Rae’s need to showboat, Sasha hits the former FCW GM with a school girl roll up for a one count. However, the Boss is unable to maintain her grasp on offense, leaving Summer open to apply a single arm straight jacket submission.

The two women grapple on the mat with Summer Rae taking the Boss to the ground again with the choke hold. Summer attempts an irish whip, but is cut off abruptly by an elbow to the face. Sasha gains steam with a flying forearm and dropkick comeback sequence that lands her opposition in the corner. Summer attempts to stop a rushing Banks from over taking her, but the Boss remains a step ahead, setting the stage for the double knee body attack.

Summer counters and manages to land an impressive kick over the top rope to Sasha’s face, using the switch in momentum to hit her new signature move, the IMDB for a two count. The frustration of not being able to put the Boss away shows on Summer’s face and she wastes precious time kicking the ropes and arguing with the referee. This proves to be a fatal mistake as the Boss manages to reverse the leggy blonde’s haphazard charge into a whip to the second turnbuckle before locking in the Bank Statement for the win.

Thoughts: Does anyone else feel like the WWE keeps missing the mark with Summer Rae? How Summer is not one of the top heels in the Women’s division with her own faction behind her is beyond me.

Summer has become the WWE Women’s Division’s work horse as of late, often being fed to the other superstars the top brass are looking to put over. However, these are no squash matches. The two tie ups with Banks have been well crafted with the story of Summer Rae having an answer for many of Sasha’s attempts to gain supremacy in the match taking center stage. Ultimately, the Boss has emerged victorious, but Summer has definitely shown that she has the ability to compete on a higher level than previously believed.

I would have loved for there to have been more words exchanged between the two this week, as both of these women work the mic very well. Many believe that this small feud between Sasha and Summer has been a place holder to get us through MITB and to Sasha’s program with Charlotte. I hope that this does not signal the end of this feud, but rather it becomes just another piece in the back story between Sasha and Summer to be used later in story lines down the road. Until then, I look forward to seeing what the Brand Extension means for Summer Rae.