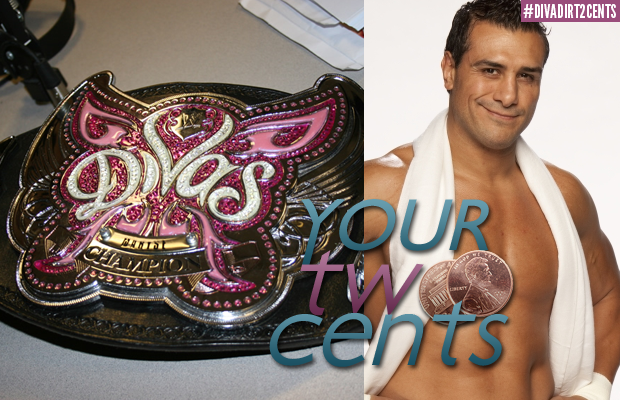 Your Two Cents is our interactive feature where we gauge the opinions of our Twitter and Facebook followers on different discussions in women’s wrestling.

This week, we’re asking this: Sunday at Payback, Alberto Del Rio kicked the Divas Title out of his way. Do you think it was uncalled for, or an acceptable act by a heel? We’ve read your responses on our social media pages and picked some of the best submissions to highlight here on the website. As always, you can join the debate by leaving your comments!

* Ashley Matthew: It was uncalled for because it showed disrespect to the Divas division. He made the title look like it was meaningless. Plus, when he did that, he could have potentially hurt someone so his actions could have easily been a safety issue. It also could have potentially damaged the belt and I’m sure those things aren’t cheap.

* Brandon Pena: I am torn between the two, tbh I think it is acceptable act as a heel, but then WWE is always disrespecting the Divas Title so I think it would have been interesting to see how the reaction would have been, had it been one of the male titles.

* @ClydeEDawkins: I know it’s an act, but you don’t disrespect a prestigious title like the Divas Championship, especially after AJ Lee just won it.

* @DamnThatPanda: Him kicking the Divas Title potentially could serve as further fuel to the Del Rio/Ziggy feud. Nothing like scorning the girlfriend.

* @DevinDWinters: Whether he was trying to garner heel heat or not, I think that was entirely uncalled for. Even before it was evident that he was turning heel, when I saw him kick that title, I knew that I wouldn’t be able to like him after that. Maybe I’m reading too much into it, but I feel like it shows a lot about the attitude of the boys in the back regarding the Divas. There’s no way that that was scripted, so he took it upon himself to disrespect the title. Gross.

* Dylan Serna-Gutierrez: He probably kicked it because he too, like many Diva fans, hate the design and is hinting for the belt to be re-designed so it can be taken seriously. Just has to. It’s all part of a storyline and his heel character, I don’t take what wrestlers do seriously unless it’s totally unscripted and causes actual harm to fans and other WWE personnel/wrestlers.

* @FUTUREloveee_: Tacky. Too bad Jacqueline wasn’t the current champion. Del Rio getting handled would have more than made up for it.

* @HeelsArePeople2: When I first saw it I thought it was too much and it got to me, but that’s a sign of a good heel move.

* Jonathan Carmona: No matter how many people bash the title and claim that it’s not prestigious, he shouldn’t have done that. What he did is very insulting and a slap in the face to all the women who have given their all and have sacrificed so much in their life to earn that title. It’s disrespectful to AJ who is the champion, especially after the stellar performance that she had with Kaitlyn beforehand. As a women’s wrestling fan in general I was very upset when I saw what he did. Even more so since he wasn’t officially a heel until after the match. If AJ would have gone and kicked the WWE Title everyone would have raised hell.

* Josue Guzman: I personally didn’t have a problem with the whole situation. Del Rio was just trying to get some cheap heat and looking at WWE’s track record, they have a history of going to great lengths to get heat from the audience. Remember CM Punk mocking Jerry Lawler’s heart attack and Paul Bearer’s death?
As disrespectful as the whole situation with Del Rio may have been, it served its purpose and got a reaction. I mean its not like he kicked the Divas Title into a trash can right?

* Martin Bentley: Del Rio was in the midst of a heel turn, so I was fine with it.

* Mary-Helen Clark: It was definitely uncalled for, but it also looks badly on AJ for leaving it on the floor. She could have placed it on the ring steps or on the apron, but she instead chose to chuck it on the ground. Both things were less than cool.

* Mikky Pérez Cascales: He shouldn’t do that, just for being respectful to the Divas. Maybe it’s not the most prestigious title of the WWE but that doesn’t mean a championship for women is less than a men’s title, so I think acting as a face or as a heel you cannot do that. Let AJ kick the World Title, everyone on the internet and on the WWE will be criticizing her for doing it.

* @pikatrick: If anyone kicked the World Title around, they would have have their ass fired. The Divas division gets no respect. Double standard.

What are your two cents on the debate? Was Del Rio kicking the Divas Title uncalled for?