British Empire Wrestling will hold the fifth installment of their longest-running annual event, Empire Fights Back 5, on Dec. 2. Ahead of their anticipated event, Diva Dirt’s Kristen Ashly discussed cupcakes, being treated like “just a girl”, and working through the pain with Zan Phoenix.

BEW was founded in 2014 by Declan Kellett and Tim Birkett, and stands as one of the leading brands in professional wrestling located in London.

As crusaders in the industry, BEW boasts that the most central part of their organization relies on women’s wrestling.

BEW continues to look for fresh talent to build a solid women’s wrestling foundation. Zan Phoenix is more than ready for the job of moving forward the women’s evolution, with her talent, intelligence, strong work ethic, and charisma.

Phoenix talked about her unconventional way of starting at British Empire Wrestling, and the determination it took to get her there.

“I was actually a last-minute stand in for someone who had to drop out, which suits me fine, because it gives me that extra determination to prove why I deserve a permanent position with the promotion. I’m pleased to say they asked me to come back after my first match and to feature regularly on their shows.

I’m always training and always trying to learn new things, new styles and bring new things to the match, which should keep my opponent on their toes, today. I recently won the SWF Women’s Championship and had a big victory at the legendary Premier Promotions, so feeling like I’m finding my feet and picking up momentum. My hard work is paying off.”

Though the women’s evolution is taking off, there’s still some concern from women wrestlers like Phoenix about how far they’ve yet to go.

Phoenix was featured in an article for Portsmouth News discussing wrestling, and whether it being “fake” has any bearing or importance. She was asked if she any further comments to add on to the idea.

“Wrestling is a show of course, but I think saying it’s ‘fake’ sometimes undermines what we put our bodies through; the training we’ve been through in order to land safely, and the technique that we aim to perfect so that we don’t injure ourselves or others. Wrestling is a very physical sport, probably one of the most physical sports that I’ve been taking part in.” 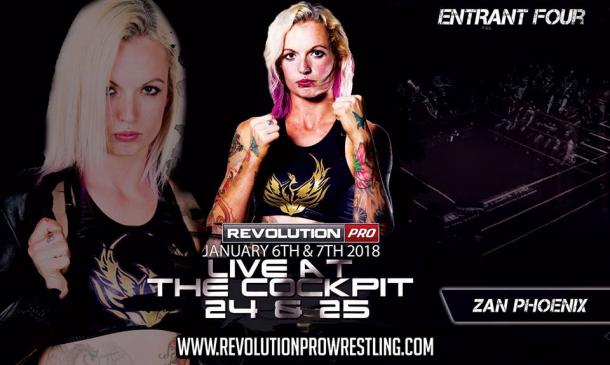 Revolution Pro Wrestling has played a huge part in Phoenix’s development, including her time spent battling Zoe Lucas and her cupcakes.

“Rev Pro will always be special to me. They’ve helped push me to be the wrestler I am today. I was the first women wrestler to feature on one of their shows, taking part in an intergender match against Rishi Ghosh. I am the only female to win the Revolution Rumble. I then went on to have the first-ever female’s match on their show against Jamie Hayter. I was also part of the first Rev Pro Queen of the Ring tournament at the London Cockpit, earlier this year. I’m proud of all I’ve achieved at Rev Pro, and there is still so much more that I want to achieve there.

[Zoe Lucas and I] definitely have a frienemy relationship. In one of my matches against her, she smushed a cupcake into my face, it took about 20 minutes to shower all the cupcake out my hair afterwards and I could still smell cupcake on me for the rest of the night. I recently wrestled her and was hoping to return the favour, however it didn’t go so well, and history repeated itself.” 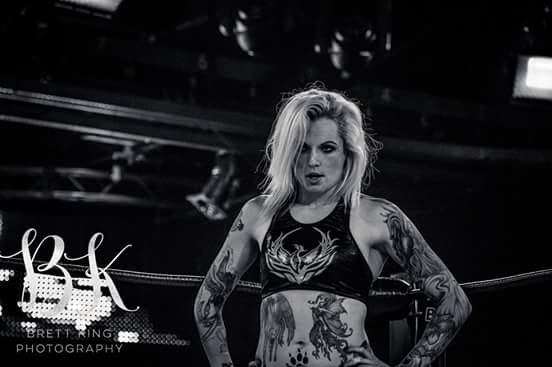 Back issues have plagued Phoenix in the past, but she refuses to give up her dream, only looking forward to the future.

“I think it has definitely made me stronger; mentally and physically. I first injured my back in a hockey match, and after loads of physio I was told that I wouldn’t be able to participate in hockey again or any high impact or contact sports. I was really determined to not let me back injury impact on my life and kept going with the physio, increasing the exercises and gradually [participate] in more and more high impact sports.

Eventually, I got to a point where I thought, ‘Why not give wrestling a go?’ I’d already smashed through any limitations the doctors had set for me . Wrestling had always been a dream of mine and I was moving literally five minutes away from the Rev Pro training school. So I set a plan with my physio, and despite a small set back when I first started training, I don’t think my back injury has hindered my progress in the ring. I’m aware that I have had back issues in the past but determined that it won’t affect my future.

There is so many amazing opportunities for wrestlers at the moment and I have no idea where this wrestling journey will take me. I want to be able to look back and say that I gave wrestling my all, and that I enjoyed every minute of it, wherever I end up.”

Phoenix and all the women of British Empire Wrestling can be seen on-demand at the promotion’s website, and at ClickWrestle.

Empire Fights Back 5 will be live at KNK Stadium in Morden, London on Sunday, Dec. 2 at 4 p.m. GMT. Return to Diva Dirt for more interviews, videos, and live action before, during, and after the event.