Elimination Chamber Predictions: Naomi vs. Nikki Bella vs. Paige for the Divas Title 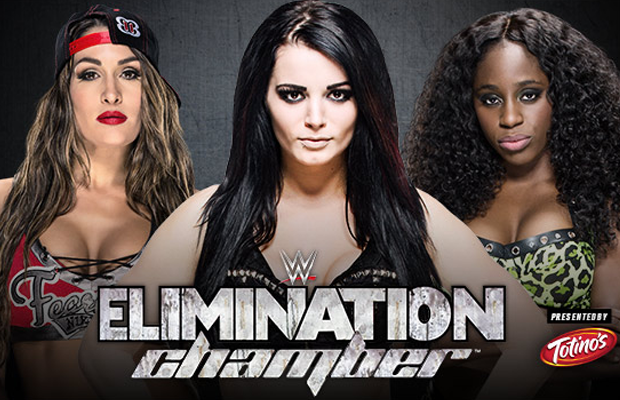 Tonight at Elimination Chamber, Nikki Bella defends the Divas Title against Naomi and Paige in a Triple Threat match. Will we see a new Divas Champion? The Diva Dirt team weighs in:

Chris: Can I predict Chyna to regain the Women’s Championship? No? Anyways… hey this has had a tremendous build, right? I just love having PPVs/live specials every other weekend, it provides for tremendous storylines with long term builds and pay-offs. Aha. What, you can’t detect my sarcasm through text? Anyways, although the storyline (or lack thereof) has reeked of non-existent lazy booking, as well as the blatantly obvious creative mentality that the main roster Divas don’t have actual characters and are all just defined as catty (see Paige’s post return Smackdown promo and Bosslady’s Smackdown Redux and Diva Dirt Weekly analysis that followed), the fact of the matter is that all three of these women can deliver in the ring. If WWE actually gave these girls 8-10 minutes they could easily put on a memorable encounter. Will that happen? From my lips to Vince McMahon‘s ears. Remember that whole Give Divas a Chance movement? That was a fun two weeks. On to the match outcome, although I adore Nikki Bella I can’t help but wonder if it’s time for a changing of the guard and Nikki Bella to go from the Fearless Divas Champion to the babyface chasing the title. And although I also love Paige, a third reign in one year is way too much. It’s time for Naomi to finally get the chance to wear the butterfly belt. She needs that career defining moment. I personally would love to see her get the belt and feud with Nikki, Paige and a debuting Charlotte.

Eleri: Alright, my head and my heart are pulling me apart. My head says Paige, my heart says Nikki. Paige has made her intentions very clear, and I don’t see WWE shying away from making her the next AJ; she has plenty of high profile title runs to look forward to, including (I think) one that belongs to Naomi. Given the crowds reaction to her, she’s a pretty safe bet. But like I said, my heart is saying Nikki for several reasons. Number one being that I love her (so what?). Number two is that I want her to surpass AJ for the longest reign. Number three? I don’t think Nikki’s been set up to lose just yet, leaving me to wonder if they’re waiting for a bigger feud for her to drop the belt. In my mind, that’s a feud with Brie. But that’s a story for another day. Outside of my guesses, of course, is Naomi. I think she’s a wildcard, and I wouldn’t be surprised if she captured the silver and pink. She certainly deserves it, and has worked her butt off the last few weeks to prove she belongs at the top of the division. But when it comes to the crunch, I’m going with Nikki Bella for the win.

Erin: Nikki’s been a virtual non-factor in this feud, so I’m convinced that she’ll be dropping the title. The real question is whether it will be Naomi or Paige. Earlier this week, I thought Paige would be the one, given how much focus has been on her. Now, I’m not so sure the focus was put there to build to a title win. I’m leaning towards her being positioned to chase the title when Naomi wins it, through nefarious methods. That way, Naomi’s reinvention and Paige’s push can both be put to use. Naomi for the win tonight.

Jack: Now has to be Naomi’s time, surely? The only curveball I see here is the fact that Paige has no back-up, whereas Naomi has Tamina Snuka and Nikki has Brie. If Paige received an equalizer of her own, that would sure be interesting. Just a theory, and I doubt it will happen, so with that in mind, Naomi‘s heel turn will be cemented tonight and she will finally get her hands on the butterfly belt. Naomi to take the title.

Josue: While I really want to see Naomi win the Divas Title to finally have her fair run with the belt after all the hard work she’s put in her career up to this point, I have a gut feeling that Paige will come out victorious tonight. It’s the same formula we witnessed during Night of Champions 2014 where the unlikely contestant of a returning AJ Lee won her third Divas Championship.