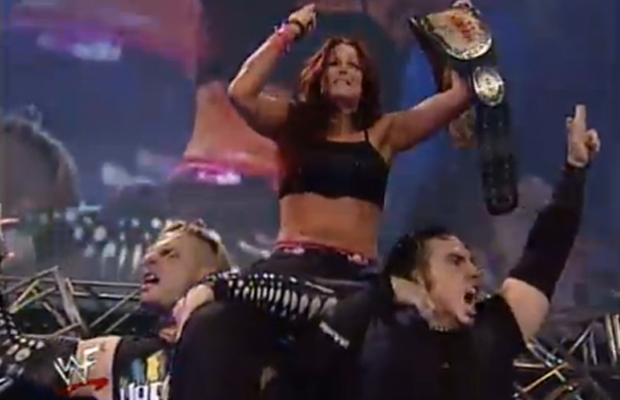 Within months of debuting with the WWE, Lita received an honor few Divas could claim: a main event slot. When she challenged Stephanie McMahon for the Women’s Title in the main event of Raw, it truly felt like an epic moment. The Rock, Triple H, Kurt Angle and The Hardy Boyz all had a presence, adding to the sense of importance around the match.

Sure, a lot of the anticipation came from Stephanie’s “spoiled princess” act and the fans’ desire to see her finally drop the title, but Lita’s popularity was undeniable. She was the sole Diva who could match Stephanie in terms of crowd reaction: as much as the fans detested Stephanie, they loved Lita.

Seeing Lita triumph over Stephanie (and, by extension, Triple H and Kurt Angle) with The Rock eagerly counting the 1-2-3 might have been what solidified my status as a wrestling fan. I had only been watching for a few months, but this moment and the excitement that came with it was the first time I was on the edge of my seat. Everything from the crowd reaction to the performances of those at ringside to Jim Ross‘s commentary (“Lita is UP!”) made this a magical moment.