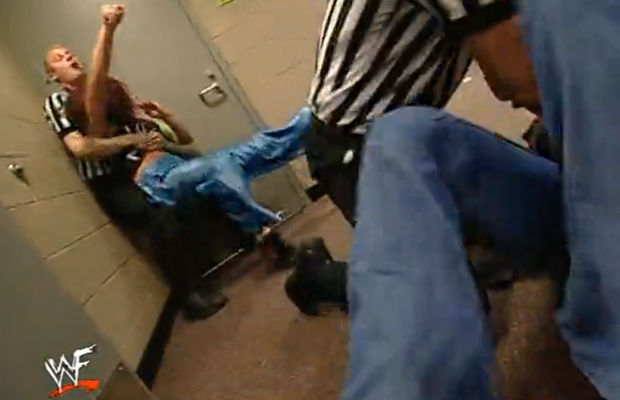 After getting the WrestleMania X-8 DVD as a kid, I discovered a golden nugget as part of the extras. As a WCW watcher as a small child, WWE was alien to me for a while and this was the first DVD I had to familiarize me with their talent. Whilst some of my wrestling childhood memories are not so good (the first match I watched had The Artist Formerly Known as Prince Iaukea in it and I had an unhealthy obsession with LA Parka and Norman Smiley), the Lita moment I’m going to be talking about in this post was definitely a great childhood memory.
The moment I am talking about was a backstage brawl between Lita and Trish Stratus. They had some pretty epic catfights over the years and this is by far my favourite and is the most unique. Unlike really any WWE altercations ever, both of them were Face at the time and that makes this stand out for me just that little bit more.

The confrontation comes from March 14th, 2002 on an episode of SmackDown! Remember that show? Stuff that actually mattered happened on there a lot in the old days. Trish speaks to Lita about a miscommunication in a match days before and apologies for the accident. Lita says that come WrestleMania when they and Jazz face off in a Triple Threat, there won’t be any accidents. She is walking out as WWF Women’s Champion and that’s that.

Trish retaliates with “When was the last time you were champion?”

Lita: “Trying to say you’re better than me?”

The stiffest slapfest ever ensues before fluorescent green mesh and blonde hair go flying into bins, doors and floors! I knew after seeing this 62 seconds of estrogen-fueled epicness, this was definitely my kind of thing. Give me more of this please! This was, and still is, my cup of tea with 65 bazillion sugars thrown in.

Often overlooked, I hope this catfight isn’t overlooked any longer. In this single performance, Lita made a brilliant first impression with me. She knew what she wanted and what she had to do to get it and her determination and confidence didn’t make her seem cocky in the slightest, which if you saw this segment on paper, would probably give you those vibes. Lita was alternative, edgy and could slap as good as the best of them, and I immediately was a fan. Although she didn’t win the title at WrestleMania, she proved to me how tough she was too, taking a crazy bump off the top rope thanks to a Jazz Fisherman Suplex.

Thanks Lita for making a major mark on what got me into women’s wrestling. Your epic, awesome and downright cool damn self is easily Hall of Fame worthy and I’m glad to see you sit alongside the greats where you belong. I just hope you’ve thrown those trousers out though. I’ll let you off on that one though. When you’re only flaw in a career full of making people look good as well as revolutionizing the way in which women wrestle is some dodgy trousers, you know you’re one of the all-time great.