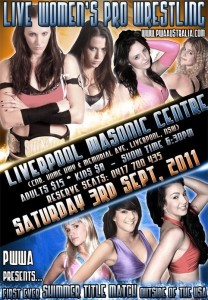 The event will feature the SHIMMER Championship being defended for the first time overseas in the main event as Madison Eagles defends in a triple threat match against Nicole Matthews and Jessie McKay.

Keep refreshing for the latest results.

* Pre-show match: JT Robinson and Jack Bonza vs. Robbie Eagles and William Kidd in tag action. Jack Bonza picked up the win for his team.

* It was announced that the show is being filmed for DVD and Internet pay-per-view.

* The next scheduled match was supposed to be Bombshell Bo vs. KC Cassidy. Queensland’s Minx and Cassidy (on crutches and wearing a knee brace) made their way to the ring. Cassidy announced that she had not been cleared to wrestle by her doctors and that her replacement to wrestle Bo would be Minx. Cassidy interfered toward the end of the match and hit Bo with one of her crutches but Bo persevered to win the match.

* Tag team action was up next with Harley Wonderland and JPE (NZ) taking on Victoria‘s Eliza Sway and Kellyanne English. Notable moment early in the match was when English did a dive to the outside onto both Wonderland and JPE. English took the beatdown for most of the match but made a comeback and the hot tag to Sway. In the end, Sway picked up the win for her team.

* Savannah Summers entered the ring next but hid in the crowd, and when her opponent Megan-Kate (NZ) made her way out, she attacked her from behind. Megan-Kate scored the victory and Savannah left the ring to “you suck” chants.

* “The Rate Tank” Kellie Skater vs. Evie (NZ) is up next to ring back in the action after a short break. Evie takes the win after an impressive, hard-hitting match!

* Time for the main event! Canada’s Nicole Matthews vs. “Everybody’s Favourite Girlfriend” Jessie McKay vs. champion Madison Eagles for the SHIMMER title. Match started with a triple headlock spot, and was followed by a three-person roll-up. Continued with a series of hard-hitting, high impact moves and impressive reversals. Huge McKay fan following in the building. Madison hit the Hellbound on Nicole Matthews and retains the championship after an excellent match. All girls receive a lengthy round of applause for their efforts.

PWA Australia’s next show will be taking place on October 7 at the Liverpool Masonic Center.