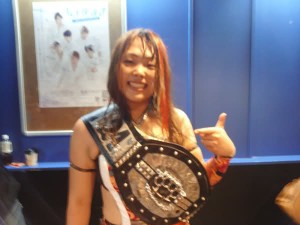 Shirai had only won the belt herself two days earlier, after pinning Ayumi Kurihara.

Hiroyo’s match with Mio took place in the first round of the tournament (which was being held to determine a number one contender to Chikayo Nagashima‘s OZ Academy Openweight Championship). Hiroyo won with a Ligerbomb.

Matsumoto would then go on to win the entire tournament itself, beating out Ran YuYu in the finals. 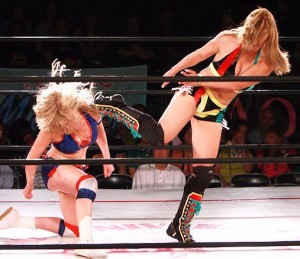 With the departure of Yumiko Hotta, a press conference was held at the end of May announcing that Universal Woman’s Pro Wrestling REINA would be re-launching as REINA x WORLD, with their first show – to feature a tag team tournament – to be held on June 9 at Shinjuku FACE. Their partnership with CMLL will remain the same.

The show also featured the Japanese debuts of Canadian Leah Von Dutch and American “Crazy” Mary Dobson, as well as a returning Mia Yim (on her fifth Japanese tour).

As a result, Shida and Fujimoto become the 4th REINA World Women’s Tag Team Champions, and will defend their titles in Mexico next month.

In unfortunate news, Aoi Ishibashi was stretchered off after her match with a broken collarbone, and Yim filled in for her in the main event at the last minute.

In other Leah Von Dutch news, she’ll once again take on Sara Del Rey for CHIKARA at their show “The Foggiest Notion” on June 23. Von Dutch, whom made her debut for the company at the end of March in a three-minute loss to Del Rey, is looking to prove herself against one of the best wrestlers in the world.

The show will take place at the Bear Creek Country Club in Strathroy, Ontario.

In a huge match, former SHIMMER Champion Cheerleader Melissa will take on ECCW Women’s Champion KC Spinelli in the latter’s debut for the company. Spinelli is a star on the rise, while Melissa comes off one of the best matches in Femmes Fatales history – a twenty-five minute time limit draw vs. Hailey Hatred in March.

Another match announced for the main show will be Mary Lee Rose (with Mademoiselle Rachelle in her corner) vs. Missy.

Two preliminary bouts have also been added to the pre-show entertainment: Quebec wrestler Deziree will battle Milouu, while Serphantina (whom was supposed to be on their last show, but injury prevented it) will verse another first-time talent – Angelus Layne. Layne made her debut at SHIMMER’s most recent set of tapings (held in March), on their SPARKLE pre-show.

Layne will also wrestle MsChif June 22 for AAW in Chicago. 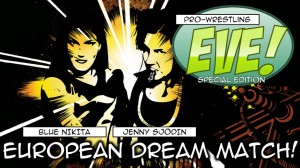 In exciting news, Pro Wrestling:EVE have announced that Blue Nikita will make her return to the company for a “European Dream Match” against former EVE Champion Jenny Sjödin.

Blue Nikita is only one of two returning EVE talents that have been promised for the July 14 show, which will also feature the debut of TNA Knockout Winter (aka Katarina Waters), as well as “one time only” and “must see” matches.

The match will take place during their “Special Edition” show at the Delphi Centre in Sudbury. Tickets can be purchased this link. 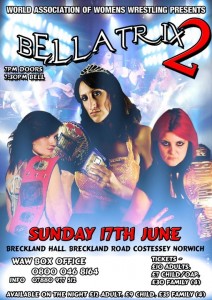 WAWW is holding their next show June 17 at the Breckland Hall in Costessey, Norwich. A pretty full card has already been released, with more to still be announced:

The WWE Divas are being advertised as being part of the next WWE NXT tapings to be held on June 14 at the Full Sail University.