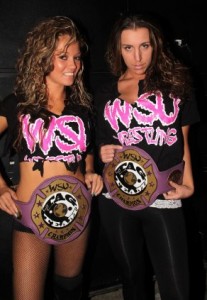 WSU’s Amber (of the ‘Boston Shore’) has announced she’s quitting wrestling and is un-booking herself from all future wrestling shows. She is dealing with personal issues and will be leaving wrestling for an undefined period of time.

WSU has ruled that Lexxus can still defend the tag team titles but must find a partner to replace Amber.

Diva Dirt wishes Amber the best of luck during this trying time.

Australia’s Shazza McKenzie will make her debut for ECWA‘s ‘Spring Battle‘ event on March 3rd in Newark, Delaware. She’ll be taking on the returning Kylie Pierce in singles action.

Veda Scott will also be making her return to ECWA at their ‘Stingray Rumble‘ show on April 21st in Sewell, New Jersey, in a match against CZW Academy Graduate Kimber Lee. 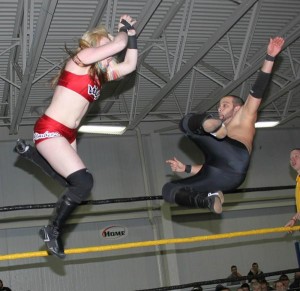 Speaking of Kimber Lee, CZW celebrated their 13th anniversary in Voorhees, NJ on February 11. Despite repeated interference from The Runaways’ Joe Gacy and Ryan Slater, she was pinned by Alex Colon. After the match they gained a measure of revenge by beating down on Ruckus and attacking Colon.

This all went down at the same show that Mia Yim challenged Greg Excellent to an intergender Tables, Ladders and Chairs match (a challenge that Excellent accepted).

MMA fighter Tara LaRosa was also in attendance at this show. LaRosa says she’s been a wrestling fan since she was a child – the early 1980’s.

Check out the latest STARDOM results below. The event, held in Nagano, Japan on February 11, drew a crowd of 370 people.

We have a correction about a previous STARDOM news story as well. In our last News in Brief, we incorrectly reported that Sarita would be wrestling for them on March 4. Reader YANO has informed us that the main-event match – Sarita and Io Shirai vs. Nanae Takahashi and Miho Wakizawa – will still be taking place, but not on a STARDOM event. The show is an independently produced show by Shirai. We’ll have results when they’re available!

Ice Ribbon presented New Aisuhiro #368 on February 11 in front of a crowd of 99 at the Warabi Dojo in Saitama.

Hikaru Shida, whom was scheduled to be in the main event match, was forced to pull out of the event due to suffering a back injury during training on February 10.

SMASH is holding one of their last ever shows (if the Wrestling Observer Newsletter story about a show being held in March is to be believed) next weekend at the legendary Korakuen Hall in Suidobashi. On February 19, the following two matches will take place:

NCW Femmes Fatales, in collaboration with HighSpots.com, are presenting a women’s match during the WrestleReunion in Toronto on April 14th. The match will take place during the Pro Wrestling Superstars show that will showcase a plethora of international superstars.

The Femmes Fatales match will be “The Oncoming Storm” Kalamity vs. “Super Hardcore Anime” LuFisto.

If Kalamity is still champion after Femmes Fatales VIII on March 10, then her title will be on the line during this match-up. 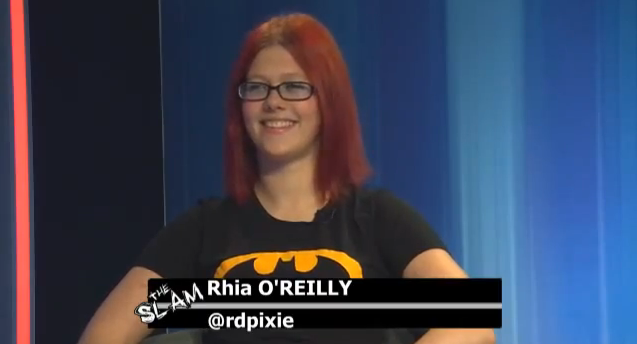 Ireland’s Rhia O’Reilly was recently interviewed by The Slam. In the interview, she talks Pro Wrestling: EVE, the latest in her wrestling career and divulges on her upcoming match with April Davids (which will take place as part of the ‘Queen of the Ring’ tournament at the first-ever EVE iPPV on February 18, to be broadcasted live here on Diva Dirt). Take a look below:

Rain has written a very personal blog about her medical issues as a child. She wrote:

When I was a baby I’d fuss and fuss. At the age of 2 they finally diagnosed me with Juvenile Rheumatoid Arthritis. Since the age of 2 I’ve been on meds, in the Children’s Hospital, and in the surgery center. I knew going weekly to the Children’s Hospital that I was NOT the worst off. I made friends, had fun, but was also scared every time I went there. I was poke, stabbed, had blood draws, draining/scoping on my knees a LOT. I knew I had problems, I knew I was in pain, I knew I couldn’t do some of the things other kids did, because my mom and doctors told me.

After telling a sad story about having to spend a day at Como Zoo in a wheelchair, Rain says:

That day I decided I was NEVER going to be in a wheel chair and I was never going to let this effect my life EVER!!!!! As soon as I got home, I rebelled against the chair and refused to use them.

Today… I am an accomplished world wide female wrestler. I am a personal trainer. I am a yoga instructor. I went to school, finished, and preparing to take my state boards. I am a very active YOUNG lady and I plan on staying that way my whole life, with NO excuses.

As a way of helping out, and paying it forward, she’ll be auctioning off all kinds of things (wrestling items, dates, etc.) and thinking of creative ways to benefit The Children’s Hospital. Right now, you can bid on her ring-worn gear on eBay.