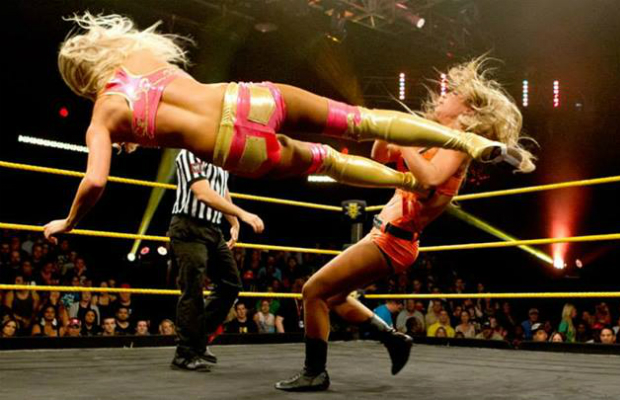 Good day to all who open this, and allow me to introduce you to this weeks recap of all things Diva oriented on this weeks episode of the longest running episodic wrestling show to feature a ring with yellow ropes, NXT. If you’ve been following my journey to the center of the Womens Championship tournament, then you definitely need no introduction to what’s been going down. For those who haven’t, or who may have missed a week, let me bring forth what point we are up to as of now.

Tamina Snuka brought her finest angry face expression to a match against Paige, ultimately losing out to the fair skinned femme fatale via a roll up. Alicia Fox then took Bayley‘s hugs and kicked them to the curb to move on. Following that, we had Summer Rae send Sasha Banks all the way into filing for bankruptcy when she debuted a leggy new finisher to put the spitfire away. Rounding out the batch of openers, Aksana attempted to burst Emma‘s bubble with a second victory over the dancing queen, but Emma showed just how much the roar of a crowd can change how a match goes down when she forced Aksana all the way back to the foreigners native shovel-beating country of Lithuania with the Emma Lock.

This brings us to last week where we had the first semi-final match that pit Paige against Alicia Fox. In what I personally dubbed my favorite of the matches thus far, Paige showed just what living with someone as terrifyingly captivating as Saraya Knight can do for them, when she put Alicia Fox away and scored the somewhat of an upset victory if you look at it in terms of the fact she defeated two main roster Divas to make it to the end. This week, however, we step into the second semi-final match as Summer Rae faces off against Emma. I’ve been clamoring for an Emma/Paige final since the very first round, but will NXT give it to me? Tonight’s the night we find out, and I’m officially ready to take six deep breaths and see.

Summer Rae’s illustrious theme song hits, and while I wish it were the version that has lyrics included, I still enjoy the fine beats. She steps out from the back making title motions around her waist and downplaying every fan at ringside as only Summer Rae can. Following her corner pose and the introduction-ing (if that’s a legitimate word), we then erupt in a flurry of bubbles, dancing and all around fun as Emma bursts onto the scene. The fans present our dancing royalty with nothing but cheers, applause, and screeches as they should, and then they fire up to let out a pop of happiness when she correctly flips into the ring. Summer Rae seems to need restraining in the background, but the fans pay no attention as they are too infatuated with dancing!

The bell sounds and the fans immediately chant for Emma as the two lock up. Summer manages to get Emma in the corner and asks if she wants to go, before slamming her head into both the turnbuckle and the canvas. The chants continue on, as does Summer Rae’s dominance. Our first lady starts choking the dance abilities right out of her competition, but only for a two count. A suplex follows suit, then rounding it out with a Summer Rae style arm lock that utilizes her distinct leg features as well. Emma tries to roll through it with a brief pinfall, but Summer reverts right back into the lock. Summer begins to laugh and taunt Emma, which in turn makes me both laugh and feel like a bad Emma fan for being amused at her misery. Nonetheless, Emma just manages to break out (okay, she’s kind of kicked), but she then gets a roll up for a near fall. Summer with one of her great dropkicks, then followed up with a headlock that Emma eventually fights out of to the crowd’s delight. Summer sends Emma into the corner, but Emma slips between the ropes to evade her oncoming attack! She then headbutts Summer in the abs and slides through into a sunset flip, but without the flip… so I guess she slides into a sunset for another close call.

Emma with a drop toe hold to send Summer into the corner this time, as she delivers with a running crossbody for a two count! Rae is sent off the ropes and this go around, it’s her who delivers the sunset flip (with actual flip)! Unfortunately for her, Emma sits down and begins to dance on top of her as the referee counts! Summer counters! Emma counters! Emma wins! Everyone in the crowd, as well as this reviewer, begins to execute the Emma dance in celebration that the finals will feature the match I’ve been hoping for. Unfortunately, I think despite the fact this is taped about a month before me writing the recap, Summer must have heard me because she puts an end to the dancing and screams “Who’s your favorite now Bobby?!” (Note: I may have added half of that last sentence in as my memory isn’t the best.) She beats Emma down, but out runs Emma’s future competition in Paige to scare Rae off! Summer walks up the ramp as Paige helps Emma up and they engage in an interesting stare off. Who will the crowd go for?! They seem undecided at the moment, but Paige backs down as Emma’s music hits and she begins to dance.

Also to note, there was a hilarious segment involving Bayley and (let the sound of a thousand harmonized angels sing that I finally get the debut of) Charlotte, but after spending 35 minutes typing everything I could think of to find it and getting nowhere, I had to eventually give up. But if anyone finds it, please watch as it’s worth it. It involved Ric Flair, Bayley WOO’ing, and the announcement that the day I have been waiting months for is finally going to arrive next week when Charlotte makes her in ring debut against Bayley. I can hardly contain my excitement, in fact, I would like to take a moment to dig out a photo of current Big Brother 15 contestant, Helen Kim, who displays the proper reaction that both she had to becoming Head of Household this week, and that I had to the news of Charlotte’s impending debut: 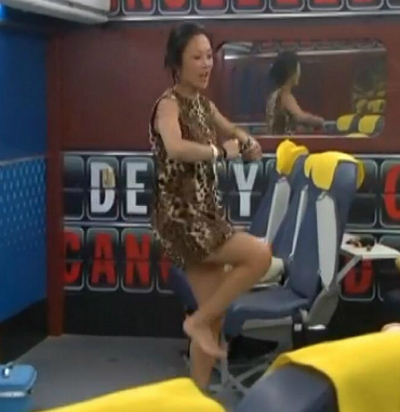 (… if the picture doesn’t illustrate it well, that’s a dance. And while it may not be a dance most people do, it’s one that my socially awkward self would.)

Thoughts: I don’t think there are words capable enough to display my happiness. It’s like if you take Emma’s dancing mixed with Bayley’s need to hug and display her general upbeat personality, that’d be how I feel at the thought of not only Paige vs Emma, but the debut of Charlotte. The next two weeks are going to be extremely exciting, and I cannot wait for them.

Let’s delve into the match, which I absolutely loved. The semi final matches definitely stepped it up from the opening round bouts, and Emma/Summer played off each other very well. It’s no secret how much the crowd loves Emma and loves to hate Summer, so mixing them together proved to be great. Their chemistry was fully on point, and nothing seemed off in the slightest. I especially love how Summer screams and taunts the fans from the moment she steps out from the curtain to the moment she steps back. Most heels feel too silent to me, like they just walk out and do submissions and walk back, so I feel like Summer is a breathe of fresh air. Emma is wonderfully unique in ways we already know that I’m sure I don’t need to reiterate, but I’d have to say that if I were to pick a high point, it would actually not even be anything from the match. And I don’t say that in a negative way, because I enjoyed the action from start to finish, but what I loved even more was the aftermath. Having Paige run out to essentially save her competition beefed up the tension for their upcoming finals match a lot. Is Paige going to turn on Emma, should Emma win? Is Emma fully trusting where Paige lies just because she helped her and didn’t attack just yet? Whatever it is, Summer Rae would likely take sheer pleasure seeing the two of them on the outs, so whatever makes the first lady happy makes us all happy right?

Oh, and did I mention enough that Charlotte’s in ring debut is next week? And that Bayley “WOO’ed?” Seriously you guys, it bums me out that I couldn’t find this segment to recap anywhere.

Until next week’s Flair-rific extravaganza, adios!