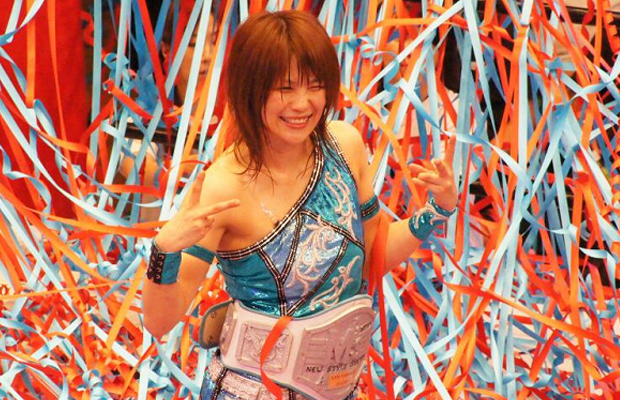 Several months after announcing her impending retirement, Ayumi Kurihara has finally hung up her wrestling boots.

Ayumi made the tough decision to retire after incurring several nagging injuries, the worst of which was one to her clavicle.

On her way out, she made one last appearance for SHIMMER Women Athletes in April, wrestling Mercedes Martinez in a very hard-hitting match on the Volume 53 iPPV in Secaucus, NJ.

The 29 year old closed the book on her eight year career on August 4th at a Pro Wrestling WAVE event titled “Thank You for Everything”, held at the legendary Korakuen Hall in front of 1,813 fans. It was a sell-out event.

She wrestled twice during the show: she defeated her trainee Mika Iida in the opening match, and then teamed with Iida and AKINO in the six-woman tag team main event, where they defeated Aja Kong, GAMI and Tomoka Nakagawa.

Kurihara pinned Kong to gain the final win of her career.

After the match, Ayumi was showered with streamers (of which you can view in a very cool video here) and carried from the ring on the shoulders of several of her fellow joshi.

You can check out a gallery of her final moments in the ring below, thanks to Youji Kawauchi.

Full results from the show below: