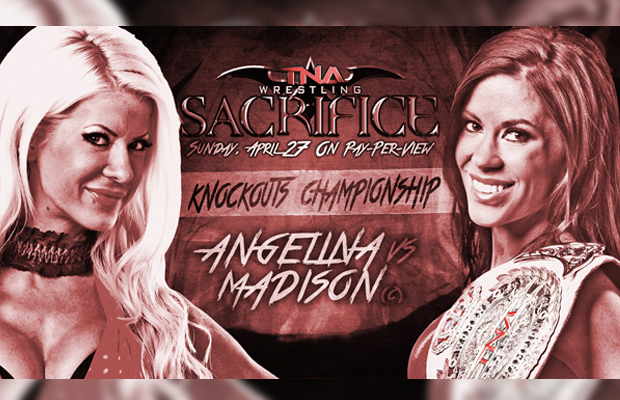 Tonight at Sacrifice, Madison Rayne will put her Knockouts Title on the line against Angelina Love. Will Angelina’s return be capped off with a title win? The Diva Dirt team weighs in:

Chris: From the moment Angelina returned to TNA I expected her to win the championship at the next Pay-Per-View but now, two things make me uncertain. The first of those would be Angelina’s victory on the go-home show edition of Impact. While that old theory may be folklore, I can’t help but notice that The Beautiful People have been mostly victorious since their return. The second thing that makes me ponder is the possibility of Gail Kim playing a role in this match. While Gail hasn’t even announced as being in her former BFF’s corner, her claims of wanting to stop The Beautiful People from “making over” the Knockouts Division make me wonder if Gail could possibly play the role in the decision tonight? Due to these factors, I can’t help but think that Madison Rayne will retain the title tonight at Sacrifice and the feud will continue.

Cryssi: Madison and Angelina have a lot of history and a lot of stuff to build on. I think this match has the potential to be amazing given everything they have to work with. The Beautiful People are devious and deceitful and always have some type of trick up their sleeve. That being said, Madison has a past and she’s not above trickery either. So going out on a limb, I say Madison lays down for Angelina tonight to pull a swerve and we get the trio back together in full force with Angelina Love as champion, and they go on to make Gail Kim’s life hell.

Eleri: It’s been a good week for the Knockouts and the division is really picking up. Honestly, I thought the reformation of the Beautiful People might have been a little dull, but I’m really happy with what we’ve been getting and I’m looking forward to Sacrifice. I predict Madison Rayne will retain, leading to a Fatal Four Way for the Knockouts title somewhere down the line between Madison, Angelina, Gail and Velvet Sky. For now, Madison is my pick.

Erin: Though Gail Kim’s babyface turn seems to throw a wrench in the plans of The Beautiful People, I can’t help but think momentum is on Angelina’s side. This return was made to shake up the division, and what better way to cement those changes with a title switch? Madison has been champ for a while now, and things only seemed to really pick up with Angelina’s return. That makes me think that TNA has their sights set on Angelina/Velvet dominance, with Knockouts like Madison, Gail and Brittany trying to bring them down. For that to happen, Angelina Love needs to be Knockouts Champion, so I’m gonna go with her to win tonight.

Jack: Madison will retain here I think. It’s inevitable that Angelina will eventually get her record-breaking sixth Knockouts Championship reign yet I feel it’s too early for it to happen yet. I honestly think Angelina and Velvet will be co-champions when either of them win it next but that’s another story for another day. Madison Rayne retains.

BREAKDOWN: 3 for Madison, 2 for Angelina.