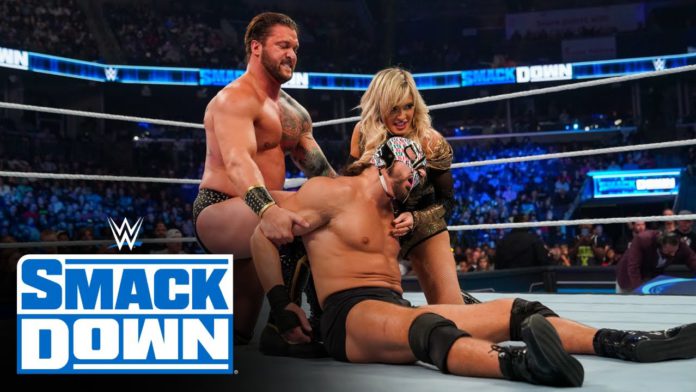 On the Jan. 6 episode of Friday Night SmackDown, there were two matches featuring the women’s division. First we had the TV in-ring debut from Scarlett as she teamed up with Karrion Kross. Their opponents were Emma and Madcap Moss.

Two weeks ago, things heated up when Emma slapped Scarlett. The final moments of the match saw Scarlett get a near fall before Emma executed a suplex and a single leg kick and went for the pin. Kross pulled Emma off the cover prompting Emma to slap him. Moss tagged in and would eventually be place in Kross’ finisher for the submission victory. Kross and Scarlett celebrated their victory by sending a message to Rey Mysterio and placing his mask on Moss.

Also on SmackDown, the new champion Charlotte Flair took to the ring and the mic. She thanked the crowd for their warm response on her return and championship win. After mentioning Rousey’s defeat, the crowd chanted “Thank You, Charlotte” which The Queen said she never would have expected to hear. She says she will focus on three things – passion, dedication & consistency and said that she would not be complacent

It would then be Sonya Deville who interrupted Flair. She says that Flair should have an asterik next to this 14th championship because Rousey was already “half dead” after defending against Raquel Rodriguez. She then challenged Flair to a match right then and there with the title on the line. She wanted to see how Flair would handle a fresh opponent. The crowd was firmly behind Flair telling her to “whoop that trick.”

B-Fab was on this week’s episode and join in on the post match attack of Ricochet (vs. Top Dolla) with her Hit Row counterparts.

Another vignette aired for Lacey Evans.

On NXT Level Up, a tag team match took place between Sol Ruca & Dani Palmer vs. Amari Miller & Elektra Lopez. Miller and Lopez picked up the win after Lopez delivered the elektric shock on Palmer.

Check back in with Diva Dirt for more news and results from the women of SmackDown.