SHINE 17 Tomorrow on iPPV: Full Card & How to Order 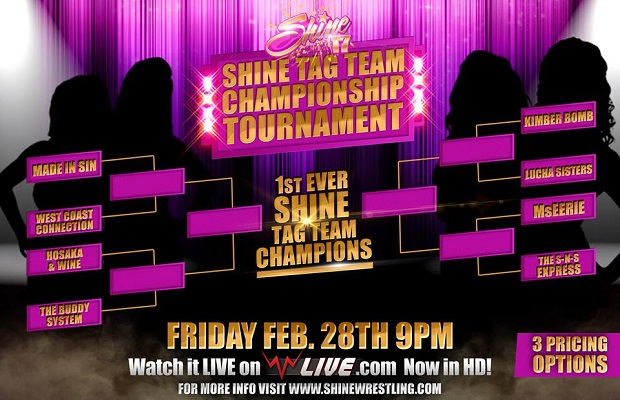 Tomorrow will see another seminal event in SHINE’s history, as eight teams will compete to become the first ever SHINE Tag Team Champions.

The teams will compete in a one-night knockout competition, with a number of newly-formed teams taking part, and the tournament brackets opening up the possibility for some highly-anticipated match-ups as the tournament progresses.

In bracket A, Made in Sin (Allysin Kay and Taylor Made) will hope to bring gold back into Valkyrie’s hands quickly following Rain‘s SHINE Championship defeat and Ivelisse‘s expulsion from the group at the previous show. They find themselves up against the West Coast Connection (Su Yung and the returning Tracy Taylor) in their first round match-up. Also in bracket A, recently-established team The Buddy System (Heidi Lovelace and Solo Darling, led by Daffney) are in action against the fringe veteran team of Malia Hosaka and Brandi Wine.

Bracket B is arguably the harder of the two to predict, with Cherry Bomb making her first appearance in SHINE since the debut show in 2012, teaming up with Kimber Lee to face another new team of the Lucha Sisters (Mia Yim and Leva Bates), two women who, while they haven’t teamed up in the past, are great friends and certainly have a lot of history both inside and outside of the ring. Rounding off the competitors, The S-N-S Express (Sassy Stephie and Jessie Belle) are without doubt one of the favourites for the tournament, with plenty of experience as a team and a solid win/loss record. However, their first round opponents are another well-established tag team in MsChif and Christina Von Eerie.

Meanwhile, Ivelisse will make her first SHINE Championship defence since winning the title from Rain at SHINE 16. The Huntress will go one-on-one with the well-travelled and highly regarded Latina Sensation Mercedes Martinez in what could well be a defining point in both women’s careers.

Elsewhere, Ivelisse’s Valkyrie replacement Serena Deeb, fresh off her SHINE debut last month, will go up against Angelina Love. The match was booked at Love’s request, and Deeb has accepted, stating that she will reveal exactly why she did what she did last month, showing everyone that she is the best women’s wrestler in the world in the process.

See below for the full card:

SHINE 17 comes to us live tomorrow night from the Orpheum in Ybor City, Florida, at 9pm ET (2am GMT), and will be streamed live on iPPV. Click here to order the show.