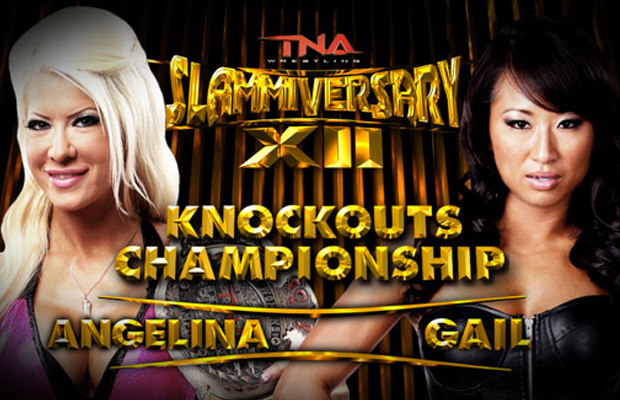 Tonight at Slammiversary, Angelina Love will put her Knockouts Title on the line against Gail Kim. Will the Beautiful People’s reign of dominance end? The Diva Dirt team weighs in:

Chris: I’m not used to TNA having back to back PPVs anymore so this is kind of refreshing! As I’ve stated before I’m really glad to see these two facing off at one of TNA’s bigger shows of the year as they are two of the biggest Knockouts of all time. I would have liked to see a little bit of a storyline between these two besides “I don’t like you. I want your belt.” but nonetheless, I’m still excited to see what these two come up with. I’m going to go with Angelina Love to retain and then feud with a returning Taryn Terrell.

Cryssi: This is a match that has the potential to be amazing and I’ve got no doubt that these two ladies will deliver. TNA has such a love affair with Gail Kim that it wouldn’t shock me to see her pick up the victory tonight. That being said, I think it’s too soon to take the title off Angelina, so my pick is for Gail Kim to win in some type of way that leaves Angelina as champion.

Eleri: I’m going with Angelina Love, as I don’t see her dropping the title yet. I’d like to see Taryn return, costing Gail the title, and going heel and joining the Beautiful People. She has the look and the ability, and their feud was cut short waaaaay too soon.

Erin: I just can’t see Gail winning the title yet. She spent the better part of last year as Knockouts Champion, reigning over the division when it was in its dry spell. Now, I’m not sure the division needs (or would benefit) from her being champion again just yet. Let The Beautiful People do their thing, and let Gail chase the title for a bit longer. I think the story’s only partway through, so a happy ending (Gail winning) would be premature. The stakes just aren’t high enough yet. I say Angelina Love retains and lights a fire under Gail.

Jack: I don’t think there’s been enough investment in Gail for her to get the belt back just yet but hey, this is TNA after all! I’m thinking Taryn Terrell will return soon and perhaps rekindle her feud with Gail over the number one contendership so I’m predicting Angelina Love will retain after some shady antics!

BREAKDOWN: 4 for Angelina, 1 for Gail.