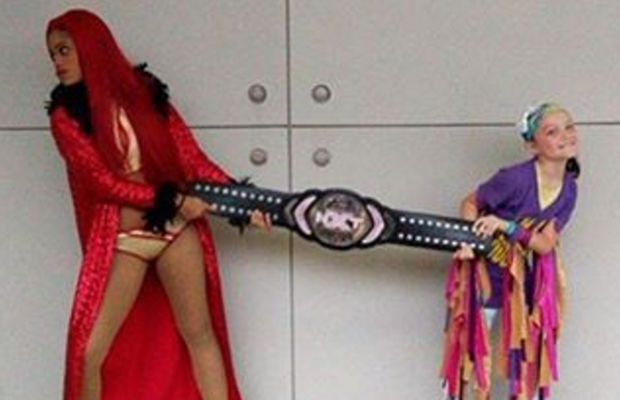 I would be lying if I said I didn’t fangirl when I saw this photo. My favorite random 1999/2000 tag team (and the rightful owners to the D-Generation X name) were reunited this past weekend. Chyna and Billy Gunn met up at a wrestling convention. The 9th Wonder of the World and The One are looking better than ever!

She may not have won the coveted Tough Enough prize, but contestant Gabi Castrovinci is continuing her in-ring training in hopes of becoming a WWE Diva. Gabi uploaded a video training at WXW and showing off an impressive enziguri and dropkick:

Progress or What? Lol I love Messing around with WXW girls ?????? outfit by @marinamorena.fitness

WWE Hall of Famer Trish Stratus has countless magazine photoshoots under her belt, and her son Max joined her on her latest for She Spoke Magazine. Could Max one day be photographing his mother for a magazine?

Emma and her boyfriend, WWE Superstar Zack Ryder, hit up New York City this week. There’s nothing quite like NYC during the holidays. The NXT stars snapped a pic together in the world famous Times Square:

Hanging out in Times Square yesterday!!!

Brie Bella shared this heartwarming and heartbreaking picture with us. As the WWE Diva prepares to hit the week of WWE live events, her dog and Total Divas star Josie crawled her way into Brie’s carry-on bag. That’s got to make leaving home tough!

As if my heart wasn't already breaking….I come into the room to find @josie_the_frenchie laying in my carry on ? these moments make leaving so hard!!! ? #RoadLife #adogslove

WWE recently published a poll on their website asking fans which championship they would like to see return. Three of the Four Horsewomen responded to the poll with their thoughts. Looks like Charlotte, Bayley and Sasha Banks want to see the Women’s Championship return:

It’s always great to see the Divas getting along when they’re not beating the crap out of each other in the ring! Paige shared a photo on Instagram of herself, Brie Bella and Alicia Fox hanging out together before this week’s episode of Raw. They were, of course, missing Nikki Bella, who remains on the injured list:

This week I learned NOT to cross the boss! Sasha Banks tweeted out to the Bellas to have a laugh at the injured Nikki’s expense. The Bellas responded that they “run and rule” the WWE. Weave snatched! After some quick and crappy photoshopping on my part, Sasha was not too happy:

In addition to that little scuffle, Team B.A.D. ruffled more feathers when Naomi and Sasha Banks mocked The Bellas’ entrance during theirs on Raw. Nikki Bella may be sitting at home recovering, but she definitely took notice:

Before her title shot against Bayley on last week’s NXT, Eva Marie shared an adorable photo from some fans. Izzy, who everyone knows as Bayley’s number one fan, snapped a pic with Eva Marie’s biggest fan outside of NXT’s tapings. These two ladies are putting up as much of a fight as the real thing for the NXT Women’s Championship!

Raw this week also marked the return of Lana. The Ravishing Russian was by her real life fiance’s side when she and Rusev proclaimed their love for each other during MizTV. Lana let a fan who was giving her a hard time know that she controls her love life:

No human being will tell me who to ??. It's my choice & my life & I am proud to live with my consequences. https://t.co/YSrIAOyvkQ

As noted during the MizTV segment, Lana cleared up the rumors that she never went “all the way” with former fling Dolph Ziggler. Ziggler took to Twitter to address this himself:

hey gang, @LanaWWE is back! a talented young lady, that always had a huge, HUGE heart yes. she. did. #RAW

WWE’s newest Total Divas star is already making her rounds before the premiere of the next season. Tough Enough‘s Mandy Rose appeared on the Pix 11 Sportsdesk with WWE announcer Scott Stanford to discuss her career and Diva life. Stanford tweeted out a pic of the two before cameras started rolling:

New season of Total Divas kicks off next year! @ToughAmanda 2night on @pix11sportsdesk at 10:45! We get the scoop! pic.twitter.com/GVugxShIEI

With all of the craziness of the holidays setting in, it’s easy to get lost in what really matters: giving. Summer Rae did her part to support Giving Tuesday by spreading awareness and making a donation to the DTM Foundation, a cause important to her:

#GivingTuesday I gave to the charity that holds a special place in my heart, @DTMfoundation! https://t.co/vwCZlPcYEw pic.twitter.com/cSz44JqsK2

Team Bella members Brie Bella and Alicia Fox shared a delish lunch together at one of Brie’s favorite organic restaurants. The two posed for a fabulous pic together after enjoying some foodies:

Enjoyed such a yummy lunch @the_millworks with my girlie @thefoxxyone ??? ….no one ever regrets eating healthy!!! ? #locallove #locavore #experiencelocal #millworks

It’s a Golden Girls reunion! No, not from the TV show. Natalya reunited with former Divas Beth Phoenix and Cherry this week and shared a photo on Twitter. Everyone is looking fabulous!

It looks like Stephanie McMahon is showing why her fitness DVD is worth every penny. The Queen of WWE shared a video from one of her midnight workouts. While everyone else was sound asleep, the CBO of WWE was hard at work in the gym:

Brie Bella and husband Daniel Bryan appeared on E! News this week to promote the upcoming season of Total Divas. The couple also wore their finest holiday attire for the appearance:

Xavier Woods‘s gaming YouTube channel UpUpDownDown, is rising in popularity. He shared a preview for an upcoming episode, where he’ll face off against Team B.A.D. Not sure he’ll be able to handle the fire that Sasha Banks, Naomi and Tamina Snuka bring to the table:

@NaomiWWE & @WWEUsos face off in an intense game of #Frogger. Stay tuned to #UpUpDownDown to find out who wins! pic.twitter.com/2k76Zu7l37

With just a few weeks to go until we meet her beautiful baby, Rosa Mendes shared another stunning shot from her pregnancy photoshoot. She’s showing pregnant women everywhere how it’s done: