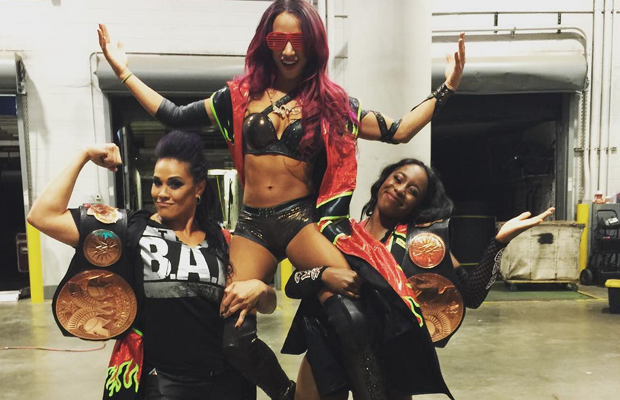 She’s starting to show!!! Mother-to-be Rosa Mendes posted a gorgeous photo of herself showing off her tiny baby bump. She seems to love this whole pregnancy thing, we’re all excited to get a glimpse of Jordan in 5 months!

She's growing by the day, she loves our little workouts, our walks and seems to loooooooooove Mexican food. Cravings are changing day by day, emotions are running wild. Pregnancy is a beautiful thing, knowing I will be meeting her in 5 months brings me so much happiness, you have to experience this to believe it. #Road2Motherhood

Brie Bella and her sister and reigning WWE Divas Champion Nikki took part in the Best Buddies Challenge in California this past weekend. The cycling/running/walking fundraising event benefits people with intellectual and developmental disabilities. The Bellas took part as part of Team Marie and had a good time for a great cause:

Enjoyed every second of this day!! Truly amazing!! @bestbuddies #TeamMaria2015

The Bellas aren’t the only ones working hard for a good cause. Lilian Garcia shared a photo of herself and her husband at the LA Love Sale charity event. Proceeds from this event go towards fighting childhood cancer:

Naomi is always keeping her body in check with some hard workouts at the gym. How is she getting it all done? Looks like it’s all because of the gym gear. Naomi posted a pic rocking a Celestial Bodiez tank top during a workout, the clothing line of former WWE Diva Kaitlyn:

Getting my sweat on in this @celestialbodiez work out shirt @celestebonin

Fans sure have been missing their favorite anti-bullying ally, Cameron, on WWE television but things seem to be going well in the life of the fiesty Diva. She recently celebrated her three year anniversary with boyfriend, Vinnie. The two vacationed in Puerto Vallarta to enjoy their relationship milestone:

Sometimes I take things in life for granted, but moments like this puts everything in perspective on what really matters the most. #3yearanniversary #PuertoVallarta

It’s no secret that the NXT Women’s Champion Bayley has been a life-long WWE fan. The Champ posted a fantastic photo revealing the inspiration behind her gear for last month’s TakeOver where she won the title:

Moments before they both walked through the curtain WWE posted this gorgeous photo of Divas Champion Nikki Bella and Charlotte preparing to do battle with each other. If we can borrow a line from LayCool, both the champion and challenger are looking FLAWLESS!

Although Lana has been sidelined with an injury she is determined to make an impact upon her return. The Ravishing Russian shared a stunning photo of herself contemplating her return in Nashville. She promised to be back for “the end of Summer”…

Contemplating my comeback.  I'll be back for the end of Summer. ? #WeWantLana ? #WWE #Nashville ?

She did it!!!! As of Monday night, Nikki Bella is officially the longest reigning WWE Divas Champion in history. The Champ shared this adorable photo moments after her historic match on Raw. There may be controversy surrounding her victory and title reign but the Nikki is all smiles after setting the record:

I made history! Your Longest Reigning Divas Champion in WWE History! Words can't even describe how I feel right now! I am so beyond blessed and honored! Tonight goes out to my Pop Pop. He taught me so much. He taught me to always be a hard worker, be respectable and kind to others, put God first and family second, and always stay humble. He always told me he was proud of me, I'll never forget that. He lead by example. I wish I could call him right now and tell him about this moment but instead I'll look above me and pray and know he was watching and is listening. Never give up on your dreams because if you have heart and passion they will come true! Pop Pop I can just imagine your smile right now and the big south Philly hug I would have gotten! Thank you for teaching me to be a strong, hard working, independent woman! I love you so much, always and forever! As well as my #BellaArmy I would be nothing without you all! You created Nikki Bella, Team Bella and the Divas Revolution! None of this wouldn't exist without your voices! Thank you! And to my coaches from the beginning who taught me so much at FCW Steve Keirn, Dr Tom Prichard, and Billy Kidman! Thank you! And thank you to my Love @johncena for teaching me so much and my sister @thebriebella for always be being my side! Love you all! Omgoodness! Tears and chills! Trying to take all this in right now!

As we announced earlier this week, Emma is launching her very own cooking channel on YouTube. The NXT star shared a photo of one of her delicious dishes and what we can expect to see her cooking up in upcoming videos. You can check out how to make this and more of Emma’s recipes by subscribing to Taste of Tenille:

Just made these bad boys!! Coming soon on Taste Of Tenille! Click the link in my bio to subscribe to my channel and get the run down!! ? https://www.youtube.com/tasteoftenille #TasteofTenille #TOT #Taste #Food #Health #Nutrition #Cooking #Recipes #yum #delicious #instafood #WWE #NXT #EMMAlution

After last week’s dance-off, Team B.A.D. and New Day have been engaging in some hilarious backstage antics. Sasha Banks posted this fantastic photo of herself, Tamina Snuka and Naomi dressed as the WWE Tag Team Champions. This feud is becoming legendary:

Not to be outdone, Xavier Woods, Kofi Kingston and Big E retaliated by posting this photo of themselves as Team B.A.D. We are honestly torn on who wore it better:

Hey there, covergirl! Summer Rae snapped a pic of her checking out her spread in this month’s Iron Man Magazine. That has to be a surreal experience. If you haven’t seen the pics for yourself, pick up the issue!

Not sure I'll ever get used to this! So crazy & humbling to open up a magazine on the shelves & see me in there! Hard work does pay off! ?? THANK YOU so much for everyone going out & helping sell out the issue in so many stores. If it's sold out in your city, like most are, you can email [email protected] to buy the issue while they last! ? #ironmanmagazine #ItsSummerTime #fitness #fitfam #fitspo #wwe #diva #nutrition #healthyliving