The Tiffany Guide to Impact: Daffney Gets Tacky 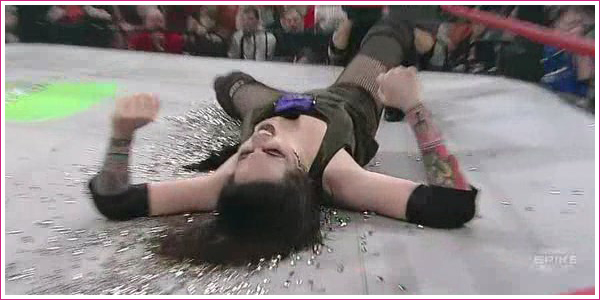 Upon the initial annoucement of this match, some have questioned just what would possess a Knockout such as Taylor to pursue a match of this nature…twice?

Regardless, TNA leaves us scratching our heads as the fast-paced action starts off with Daffney attacking Taylor from behind. Daffney’s intention to give Taylor a taste of her own medicine is quite apparent as the match seems to be going in Daffney’s favour. Daffney attempts to climb the pole in reach of the bag of tacks, but is stopped in her tracks. Taylor makes that same attempt, but is abruptly countered. Some fierce blows are exchanged, and through the struggle, Daffney manages to climb and retrieve the bag. Soon enough, the tables turn as Taylor quickly outsmarts her and snatches it from her. The exchange between these two can be attributed to that of two children fighting over a prized doll. A smug Taylor then finds herself on the receiving end of a mouthful of metal. Meanwhile, a very pleased Daffney proceeds to do the honour of releasing the contents of the bag, spreading 1,000 or so tacks onto the mat. A suplex attempt to Taylor is made and the struggle is fear inducing, but she somehow manages to keep her balance. Despite the fight put up by Daffney, she becomes reacquinted with the tacks. Alas, Daffney gets tacked for the second time this week.

Naturally, TNA will treat this as a milestone in Knockout history, and with good reason. With the first ever Knockouts Monster’s Ball still lingering at our fingertips, TNA definitely struck again while the fire was still hot. There were no major spots, maybe two ‘ouch’ moments here and there, but that’s the extent of it. By numbers alone, this is overshadowed by their encounter at Slammiversary. Regardless, TNA does proceed to push the envelope with its Knockouts during a time where women’s wrestling tends to struggle in the mainstream. All in all, it was a relatively brief match, but I felt both ladies put up a good fight. Daffney is easily one the most interesting characters in the Knockout division at the moment, but it’s discouraging to see her slowly develop a Jillan Hall-complex. This match was obviously a vehicle to prolong the Abyss/Dr. Stevie feud. Again, it does need to be re-iterated how the timing of this match in such close proximity to their match at Slammiversary almost takes away from that initial moment. The dumping of Daffney onto the tacks has now become almost as commonplace as The Beautiful People gyrating on the six-sided ring. Congratulations, TNA for entertaining your worldwide assembly of pain-enthusiasts! You sure know how to target your core audience.