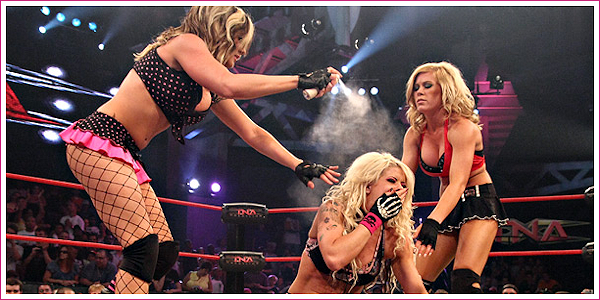 This week on Impact provided a six-Knockout tag match, pitting Angelina Love, Velvet Sky, and Madison Rayne against the likes of ODB, Awesome Kong, and Victoria. As well as an interview with former-Knockouts champion, Victoria.

Interestingly enough, Victoria is announced to be accompanied by tarantula, Poison, which has become an entity of its own. As the commentators get a little flustered over the Beautiful People’s entrance, I have to say that I have been loving Kong’s expressions as of late. The look of disinterest on her face at the start of the match is priceless.

Victoria and Angelina start off the match with a lock up, and Victoria delivers a series of open-handed punches. A run through the ropes and Victoria knocks down the Knockouts champion. Velvet Sky and Madison Rayne attempt to make the save, but Victoria takes the fight to them, as well. Angelina takes advantage of the distraction and blindsights her opponent. Angelina opts to run the ropes, but Victoria takes her down with a powerslam. She goes for the cover until the Beautiful People break up the count. ODB and Kong clear out the ring and the action breaks loose. In the meantime, Victoria resorts to some dirty tactics against Angelina as a source of expressing her pent-up resentment. Victoria delivers a scoop slam to Angelina, who soon scurries away just in time to tag in Madison. Victoria outsmarts Madison and quickly takes her down with a drop toehold before tagging in ODB. ODB lunges Madison into the corner and slams chest-first into her. She then sets Madison up for a fallaway slam, followed by a kip-up. TNA, with their now usual tendency of cutting to break during their Knockout matches, fades to commercial.

Watch the match & more after the cut:

Back from the commercial, we see Victoria back in the ring with Madison at her disposal. She is a bit aggressive in tagging in Awesome Kong. Momentarily, Kong appears affronted. She chops Madison across the chest and tags, or rather slaps. Victoria back into the match. Victoria takes offense to this and the two adversaries from last week duke it out in the ring. Kong sends Victoria out of the ring and into the ringpost. The fight soon spills out to the entrance ramp and further backstage.

Meanwhile, ODB, who is now outnumbered by the Beautiful People does a decent job of evening out her competition by slamming Madison Rayne on top of Angelina Love. ODB mounts Velvet Sky, but that gives the Beautiful People an open opportunity to overcome her. The Beautiful People continue to dominate ODB, using a distraction to the referee to save them from a disqualification. While ODB recuperates, Angelina Love taunts Cody Deaner. Shades of their confrontation last week, an irate Cody Deaner climbs up onto the apron. Angelina continues to tease him before being forced into a repulsive liplock with the Deaner. Angelina dislodges herself, but falls into a rollup by ODB for the 3-count before Madison can make the save.

I was satisfied to see the Knockouts provided with adequate time for this match. It wasn’t just the typical “wham-bam-thank-you-m’am” type of tag team matchup, and each competitor got decent time in the ring. The tension between Victoria and Awesome Kong has been steaming for quite some time, and it’s nice to see Victoria gain a rival in someone other than the Beautiful People. I’m not sure where this leaves Angelina Love as far as an opponent for her Knockout title, but there seems to be a feud boiling over between her and ODB at the expense of Cody Deaner. Either way, these impending rivalries have made a smooth transition in the division.

Earlier that night, TNA treated us with a sit-down interview with Victoria. Don West is his usual douche-self as he prompts Victoria to discuss her past WWE career, her retirement, and her most recent time in TNA. While explaining her TNA experience so far, she praises the division, particularly Awesome Kong, and even admits to tuning into Impact while she was still employed by the WWE.