The Tiffany Guide to Impact: The Beautiful People Endure ArachNO!phobia 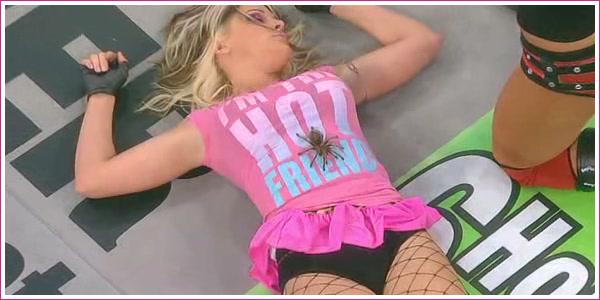 This past Thursday, TNA lead us into a featured Knockouts competition with a quick promo to hype the debut of Sarita – definitely something to look forward to in upcoming weeks.

Next is the contest of The Beautiful People, Angelina Love and Velvet Sky vs. the team of Awesome Kong and Victoria. I’ve never quite understood the appeal of wrestling in mini skirts, but nonetheless The Beautiful People make their way to the ring looking as tawdry as ever with a prop-donning Madison Rayne as their escort. Awesome Kong then enters, still accompanied by Raisha Saeed. As Victoria’s presence is felt, we see the notorious black box attached to her hip, which is only a haunting sign of things to come.

At the start of the match, Velvet Sky takes the initiative with a quick kick to midsection, and she mounts Victoria with a catfight-like offense. Referee Earl Hebner has to pry the very screehy “Vel-Vel” off of Victoria. Victoria takes her down into a wonderful submission move that exhibits her ever-impressive flexibility. She dislodges the submission into a series of armdrags and an arm lock. Velvet Sky reaches for a tag, but Awesome Kong tags herself in and tosses Velvet like a rag doll across the ring. Still harbouring a heavy grudge from their pre-Sacrifice feud, Kong motions that she wants Angelina Love in the ring. This is to the ominous yet harmonizing fan chant of, “Kong’s gonna kill you!” Kong intends to do just that as she throws Angelina Love into the corner and just beats the tar out of the Knockouts Champion.

Before the merciless attack can get too messy, Victoria makes a blind tag. However, Madison Rayne distracts the referee long enough for Velvet Sky to take a cheap shot at Victoria. This leads to a double team and a pin attempt in favor of The Beautiful People who do a fabulous job of isolating their opponent. Velvet Sky goes back into “cat-fight mode.” She then proceeds to show enough gull to arrogantly taunt Kong before dropping a fierce elbow onto Victoria for the pin. Victoria kicks out, but then suffers a hair snapmare into The Beautiful People’s corner.

Velvet makes the tag to Angelina who brutally kicks Victoria in the midsection. Great minds appear to think alike when Angeline Love pulls Victoria into the Irish Whip and both Knockouts are driven down to the mat. Angelina tags in Velvet, but before The Beautiful People can capitalize, Victoria makes the hot tag to Awesome Kong. Velvet is embarassingly thrown around by Kong, but Angelina comes to her aid, only to be taken down as well.

Kong sees this as an opportunity to set Velvet up for the Awesome Bomb, but Angelina represses that motion with shots to her back. To make the save, Victoria sends Angelina through the ropes and into the ring post. This gives Awesome Kong the opening she needs to take out Velvet Sky with the Implant Buster and the 3-count.

With Velvet Sky at her disposal, Victoria is eager to pull the tarantula out of its confinement and lovingly rest it across Velvet’s stomach. It is an undoubtfully tense moment, and even Awesome Kong’s eyes seem to ‘bug’ out of her head. No pun intended. Angelina and Madison don’t exactly try to help out their girl, but rather opt to retreat to safety.

Overall, this was an enjoyable match. I appreciated The Beautiful People’s calculated tag team strategy as well as the building dynamic between Victoria and Awesome Kong. Personally, I’m not really bothered by the whole tarantula bit, but I can understand why someone would be. The reaction by the The Beautiful People is a tad overdramatic, but that is what makes the segment that more entertaining.

Also, the segment backstage between Angelina Love and Lauren further cemented Angelina’s selfishness in regards to the rest of her team. In hysterics, she explains just exactly why she chose not to come to Velvet’s defense. To put it simply, she puts her own well-being in higher regard. I adored that bit. I thought it was hilarious, and it allowed Lauren to exude some cattiness which is a refreshing break from the emotional spaz we’ve come to know her as.