The Tiffany Guide to Impact: Uninspired Impact is Uninspired 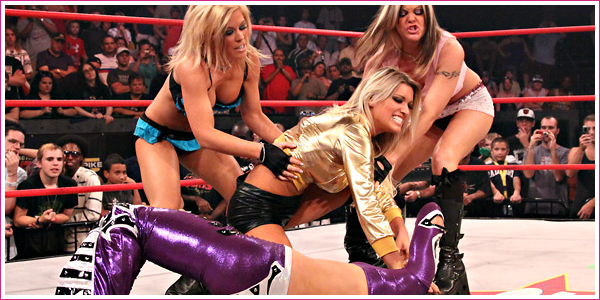 This week on the ever-so-inaptly-named program we’ve come to know as Impact, we saw two Playboy bunnies stink up the six-sided ring, a Knockouts title match, and the debut of TNA’s newest Knockout entity.

First Knockouts match on the card: Christy Hemme vs. Traci Brooks in a Playboy something-something match.  I have no idea why Christy is dressed up as a Chippendale dancer, but the ever so bodacious Traci forces her against the ropes and into a pin attempt.  Christy kicks out at 2, and Traci follows up with a mat slam.  Traci follows Christy into the corner, but receives a boot to the face.  Christy lands a charging 180 spinning facebuster.  Christy delivers an axe kick to the back of Traci’s head, but Traci kicks out as well.  Christy attempts the FFG, but the only thing catching her firecrotch is the unforgiving canvas.  Traci covers Christy which results in a nearfall.  A stinging chop to the tatas later… Traci falls into a Sunset Flip pin and Christy Hemme picks up the win.

Traci blindsights Christy from behind with an uninspired attack.  So short, it was almost painless.  As gracious as Traci Brooks is, I cannot bring myself to peg this match in a positive light, unfortunately.  Not your best, TNA. Simply put, gimmick matches just don’t fit in with the M.O. of the Knockouts division. This Playboy exhibition was moreso reminiscent of WWE pre-2008.  It just doesn’t seem right to put Christy Hemme over Traci Brooks, although I do realize that either one could do better. Moving on…

Next, Awesome Kong (accompanied by Raisha Saeed) takes on ODB for the Knockouts Championship.  With Tara on commentary, ODB and Awesome Kong begin with the match in somewhat of a shoving contest.  ODB makes several attempts to overpower Kong, but Kong knocks her down effortlessly.  Kong then delivers the Awesome Press, but to no avail.  ODB quickly rolls out of the way and catches Kong in the corner with the Bronco Buster.  With an encouraging chant from the crowd, ODB leads Kong into the corner but catches nothing but turnbuckle.  Kong hits ODB from behind… and, dare I say it… Kong forces ODB’s face into her armpit.  Sweet.  I think ODB just may have discovered the true meaning behind “Parts Unknown.”

Awesome Kong goes for the cover after a scoop slam and devastating leg drop.  ODB kicks out.  Meanwhile, TNA commentary treads into left field, taking a moment to address Tara’s MMA endeavors and even name dropping Kim Couture.  While Kong locks in the Camel Clutch, Raisha Saeed makes her way over to the commentary table.  Raisha grasps Tara’s attention, who follows her toward the ring.  While Tara is preoccupied with Raisha, Kong snatches a handful of her weave (miraculously with no mishaps, this time).  Tara outsmarts Kong with a forceful jawbreaker against the ropes.  Kong falls into a roll-up, and ODB gets the win.

Tara enters the ring to applaud ODB, expecting some show of gratitude in return for her efforts.  When ODB refuses to reciprocate the love, the two duke it out.  Kong then blindsights the dueling duo.  ODB suffers a cringe-worthy Implant Buster, and Tara follows suit.

ODB’s first “real” title defense was met with some issues.  The Knockouts’ title has been put through hell and back whilst in ODB’s possession. Despite the champion picking up the win here, this particular match seemed more about putting the Tara/Kong rivalry over rather than the best interest of the title. This never-ending brawl between Kong and Tara rivals that of Family Guy’s Peter Griffin vs. Giant Chicken. Now with ODB thrown into the mix, I’m pulling for some sort of pay off so we can all move on. Due to the heat now boiling amongst the three, I sense a triple-threat match in the future. In the meantime, I must resign myself to the fact that ODB just cannot catch a break, either way.

Last night marked the “highly anticipated” debut of Lacey Von Erich.  Certainly not the best debut of all time, but it wasn’t Shockmaster-bad.

Madison Rayne and Velvet Sky enter the Impact Zone looking to make “amends” with Sarita and Taylor Wilde.  Taylor I can certainly understand, but for what reason do they owe Sarita an apology?  Either way, Lacey becomes the proverbial party crasher and bestows the “Claw” upon Sarita’s poor forehead.  The onslaught seemingly gets so intense that the remaining members of Mi Pi Sexy have to pry their new-found leader off of their crotch-panted adversary.  The Beautiful People take a bow for their handywork and partake in a little lesbian tango of their own.  Maybe next week we’ll have a dance-off, eh?

In terms of Knockout action, this week on Impact, as a whole, was rather underwhelming.  The Playboy match was certainly nothing to write home about (not that I expected much from it), Kong vs. ODB was almost laughable, and Lacey Von Erich’s debut could have been better. The offense was somewhat unbelievable. Though, kudos to Sarita for selling that glorified scalp massage like a champ. It seems we have finally gotten some closure on Angelina’s departure, but that doesn’t make it any less of a bitter pill to swallow.  Still a bit homesick for the Beautiful People of yesteryear, I’ll reserve further judgment on Lacey Von Erich until I see what she can actually bring to the stable.