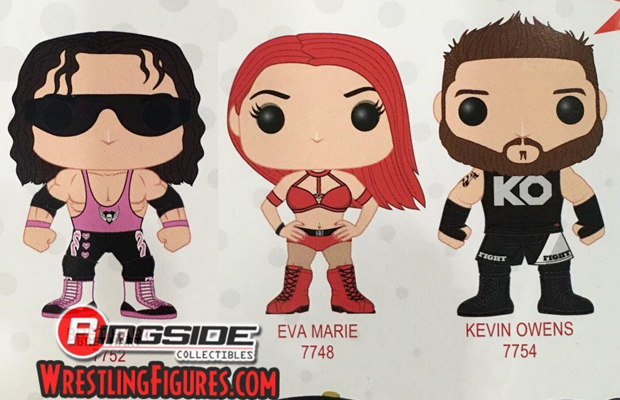 * Eva Marie will be the next Diva to receive her own Funko Pop! figure. It’s set to be released later this year. (Instagram)

* Becky Lynch spoke to The Press Enterprise about the possibility of the Divas main eventing WrestleMania, cutting a promo on Ric Flair and more. (PE.com)

* Stephanie McMahon’s Instagram was hacked for a short period last week, but is now back in working order. (Twitter)

* Summer Rae appears in a spoof romantic comedy trailer produced by the WWE, which pokes fun at her unlucky love life. (YouTube)

* Cameron worked her first main roster live event in a while this past weekend. (Twitter)

* Emma was sick in bed with the flu for much of last week. (Twitter)

* In a new video posted to her YouTube channel, Eva Marie and her husband Jonathan Coyle tell the story of how they met via Instagram. (YouTube)

* Lita and Edge have topped a WWE poll asking fans to name the hottest couple in WWE history. (Wrestling Inc)

* Charlotte gave a video interview while on the WWE’s tour of Germany, discussing the possibility of bringing back the Women’s Title, facing Brie Bella at Fastlane and more. (YouTube)

* The GFW’s Women’s Title is currently up for sale on eBay. The listing states that a new belt is being made for the promotion. (eBay)

* TNA Shop is currently running a promotion pitting Madison Rayne against Rebel in a “photo war,” with the loser getting a pie in the face. (YouTube)

* AJ Lee has teamed up with the ASPCA for the #NoMoreBalls campaign, which encourages pet owners to spay and neuter their pets. (Twitter)

* Charlotte will be judging a “WOOO!” contest at a hockey game tomorrow in Cleveland. (Twitter)

* The WWE has published footage from their recent tour of Germany. (YouTube)