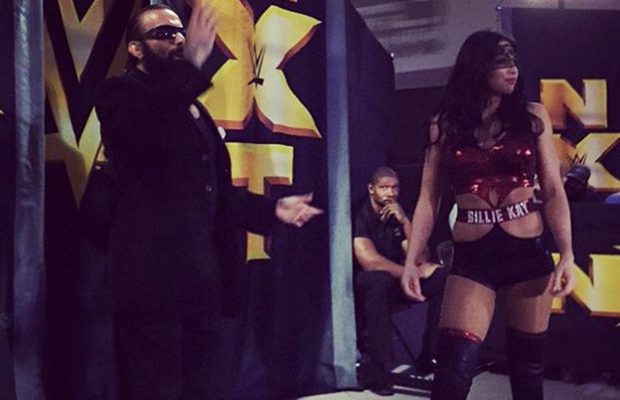 * At NXT live events this past weekend, Billie Kay debuted a new look and manager (Sylvester Lefort). It’s unknown if she’ll bring either to television. (Instagram)

* Bayley joined the main roster crew for its European tour, wrestling several shows with the NXT Women’s Title in tow and even prompting some ribbing by Sasha Banks. (Twitter)

* Paige talked to TalkSport about her mother’s Bellatrix promotion, the rumored fallout from her dropping an “F bomb” during a video Q&A and the prospect of wrestling Ronda Rousey. (Part 1, Part 2)

* Paige talked to The Mirror about building her character and responding to Alundra Blayze‘s challenge. (The Mirror)

* Eva Marie’s legal team reportedly sent a cease and desist letter to an escort service to stop them from using her pictures to promote their business. (Pro Wrestling Sheet)

* Sunny’s arraignment on her June DUI charges was pushed back to December 17th. A trial from her May charges is scheduled to start on December 7th. (Wrestling Inc)

* Former NXT Diva Zahra Schreiber made her in-ring debut at a DREAMWAVE show on Saturday night, getting the win with a Curb Stomp as the only woman in a 10-man Elimination Tag match. (Wrestling Inc)

* Rosa Mendes has a goal of showing off her post-pregnancy body on the cover of Muscle & Fitness Hers. (Instagram)

* The Diva Revolution is highlighted in the trailer for the WWE’s Best of 2015 DVD. (YouTube)

* Tamina Snuka made this week’s WWE Network Pick of the Week, choosing her appearance on Table for 3. (YouTube)

* Bayley vs. Sasha Banks and Charlotte vs. Sasha have been confirmed for the NXT’s Greatest Matches, Vol. 1 DVD and Blu-Ray. The full match listing has yet to be revealed. (Wrestling DVD Network)

* Kaitlyn is featured in the latest video from My Fitness Girls. (YouTube)

* Paige has responded to another call-out from Alundra Blayze. (Twitter)