The Wrap (September 4th, 2015): News from the Week in Women’s Wrestling 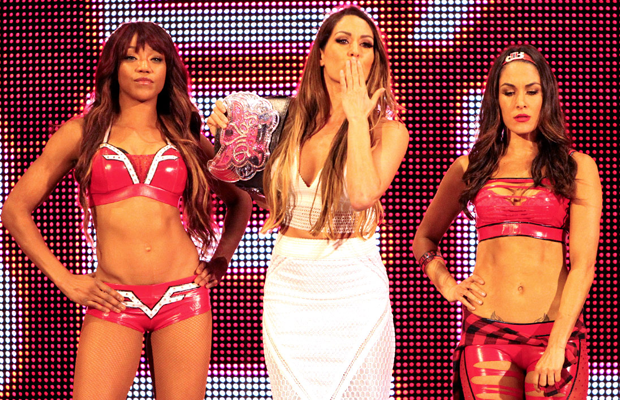 * Leva Bates, AKA Blue Pants, may have heat on her in the NXT locker room. According to a report, the resentment stems from her being pushed heavily by NXT while still being able to take indy bookings and sell her own merchandise. (The Wrestling Observer via Lords of Pain)

* In July, it was reported that Bray Wyatt and Bo Dallas‘s sister Mika Rotunda received a WWE tryout. This week, it was revealed that she had actually tried out for a ring announcer position, not a wrestling one. (Lords of Pain)

* Dolph Ziggler fueled speculation that he and Lana a real life item in an interview with Miami’s Chris Van Vliet. (YouTube)

* No Divas match has been announced yet for the October 3rd Madison Square Garden live event set to air on the WWE Network, but Team Bella is advertised for the show. (Lords of Pain)

* Sunny responded to reports that the WWE isn’t happy with her behavior, from her “Skype sessions” to her recent run-ins with the law. She took to her Facebook page, writing that she hasn’t received a check from the WWE since 2012 and sees no reason to amend her behavior just to make the WWE look “good.” (Facebook)

* Contrary to initial confusion, Charlotte was not involved with her husband Bram’s domestic violence arrest. Reports state that, though the couple split earlier this year, they are not yet divorced. On September 10th, they will have the final hearing for the dissolution of their marriage. (PWInsider via Lords of Pain)

* WWE Hall of Famer Jimmy “Superfly” Snuka, the father of Diva Tamina, was arrested in Pennsylvania on Tuesday in connection to the 1982 death of his then-girlfriend. He has been charged with third degree murder and involuntary manslaughter. (Lords of Pain)

* Chyna is still campaigning for a spot in the WWE Hall of Fame, enlisting celebrities for video endorsements. One of the most notable comes from actress Jennifer Tilly. (TheRealChyna.com)

* Emma‘s surprise win on NXT is reported to have originally been meant for Charlotte. Reports state that, though the finish was botched, there was no heat on anyone involved. Becky Lynch was said to be especially upset with the finish. (The Wrestling Observer via Lords of Pain)

* The Wrestling Observer is reporting the oft-reported rumor that the WWE is considering introducing an actual Sister Abigail to the Wyatt Family, stating that Seth Rollins had pitched the recently-fired Zahra Schreiber for the role. (The Wrestling Observer via Cageside Seats & WrestleChat)

* Speaking of Nikki: the Divas Champ recently sat down with Complex to talk about the custom Nikes she wore to the ring at SummerSlam. (YouTube)

* Dean Ambrose made some rare personal comments about his relationship with Renee Young, showering her with praise and saying that she’s “far too good” for him. (Cageside Seats)

* The man shot at the WWE Performance Center on Monday had demonstrated obsessions with several Divas, including AJ Lee and Lita. He is said to have asked about Lita during an incident with authorities in early August. (Lords of Pain)

* There is speculation that longtime indy wrestler Cat Power might soon be getting a WWE tryout. (Squared Circle Sirens)

* Gail Kim touched on her controversial tweet about Bayley and Sasha Banks‘s match at NXT TakeOver: Brooklyn, clarifying that her intent was “not to bash any other company at all” and that she loves what the NXT Divas division has been doing. (Channel Guide Magazine)

* Tough Enough winners Sara Lee and Josh are starting their training at the WWE Performance Center this month. Sara made the move to Orlando yesterday. (Lords of Pain)

* Paige will appear at this weekend’s Wizard World San Jose. She’s set to be there on Saturday from 3pm to 6pm. (Wrestling Inc)