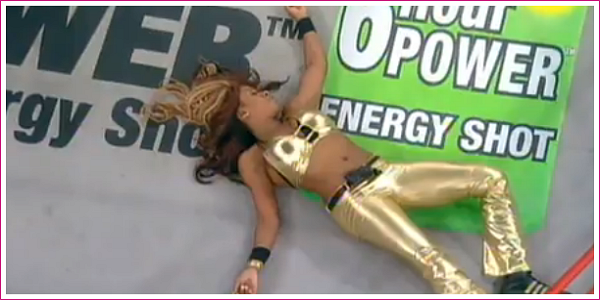 This week, we are treated to a TNA Knockout webmatch between the two accessories of the Sharmell vs. Jenna Morasca contest at Victory Road. Consequently, we also get a sneak peek of things to come toward the PPV. Awesome Kong (looking just fine without Raisha Saeed in her corner) unleashes some pent-up aggression against her former Kongtourage associate, Sojourner Bolt, to an ominous yet fitting chant of “Kong’s gonna kill you!”

The hair pulling in this match actually makes me quite nervous. And although watching one of Sojo’s tracks spiral across the ring would be a sight to see, we here at Diva Dirt express sincere concern toward any and all hair: natural or bought. So, keep the synthetics in tact, ladies!

Sojo’s feeble attempts against Kong are discouraged for the majority of match. However, Sojo does somewhat manage to hold her own in this brief match-up, relying on submissive manuevers to ground Kong. Sojo nearly gets the best of her opponent with a flying elbow. She attempts to counter the Implant Buster, but suffers much worse to an Awesome Bomb.

Looks like Sojo’s not going to be much help to Sharmell come Victory Road. Let’s hope she even makes it to Sunday. Sojo is no match for Kong? Surprised? The TNA Knockouts seem to have really gone the lengths this week to cement what we already know.