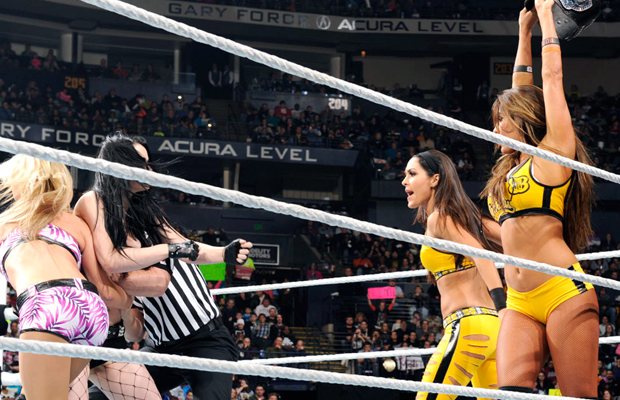 One year ago today, the #GiveDivasAChance movement officially began. Sure, it’s a cause that Divas and Diva fans have been fighting for their entire lives, but that night was when things went into full effect.

As we all can recall, it all kicked off when Paige and Emma lost to Brie and Nikki Bella in a 30-second match. Yes, 30 seconds of a whole three hour program were dedicated to the Divas. Fans became outraged and the #GiveDivasAChance hashtag started trending. The cause even caught the eye of Vince McMahon, who rarely addresses anything that the Internet community cares about. It seemed like the WWE was ready for change.

Here we are, a year later. Did the hashtag work? Are Divas more respected in the WWE and given fair time? There are fans who would argue no, but this writer feels that the Divas are finally gaining the recognition they deserve.

Let’s take a look at some of the highlights of this year, shall we?

Divas had some of the biggest show-stealing matches of this past year. Of course, Bayley and Sasha Banks tore the house down when they co-main evented NXT TakeOver: Brooklyn. The match was even voted the NXT Match of the Year. When has a women’s match ever been voted the match of the year for any promotion? Of course, we Divas fans always feel a women’s match deserves this honor, but this is the first time the WWE truly recognized the hard work of these women enough to give them – let alone nominate them – for an award. Bayley and Sasha also had an incredible Iron Man match at the following TakeOver that brought even more respect and history to the division.

The other Four Horsewomen, Becky Lynch and Charlotte, have each respectfully had some incredible matches this past year. Charlotte and Sasha were spending months after the #GiveDivasAChance movement battling each other in main event matches at NXT live events and Becky Lynch finally made her mark in an epic Women’s Title match against Sasha. Becky and Charlotte have also stolen the show against each other on the main roster. Their match at the Royal Rumble gave them the opportunity to display storytelling and exactly what they are capable of in a main roster ring.

WWE bringing three women from NXT to the main roster at once really showed just how serious they were about rebranding the women’s division and taking it to new heights. I personally feel the Divas were doing an incredible job on the main roster art the time but the help of Becky, Charlotte and Sasha elevated competition to a new level.

The women who made the main roster transition certainly have had their opportunity to shine, but let’s not forget the girls who are still down in NXT. In the past year, we’ve seen progression and character development from women like Carmella, Alexa Bliss, Nia Jax, Peyton Royce, Billie Kay, Asuka and, of course, Eva Marie. While not all of them are ring generals yet, everyone is being given a chance to show what they can do. The matches are competitive and not one sides. The women are trying new maneuvers and you can see week to week their progression. While it wasn’t a mat classic, Eva Marie vs. Bayley was arguably one of last year’s most entertaining matches. The crowd was invested in seeing Bayley defeat Eva and every tactic pulled showed shades of Stephanie McMahon and Lita’s rivalry, a time when the women were truly stars of the show.

Asuka has also quickly become a force to be reckoned with and many would say she’s equally as intimidating as the men on the roster. She brings a unique new style and an intense moveset…even though she’s got the hair color of The Kat.

While NXT is tearing it up, the women who have been on the main roster the entire year have also been given chances to pull their weight and shine since then. Nikki Bella had arguably the most dominating year of any Diva in history. She set a record as the longest reigning Divas Champion and broke out as a star on her own, showing she didn’t need to be locked into the twin angle forever. She also proved many of her neigh sayers wrong by having show stealing matches with the likes of Charlotte, Naomi and Paige. Her sister, Brie, was also an unsung hero of the division. While she didn’t rack up many wins, she continued to prove she’s a reliable worker for the women and always made her opponents look incredible.

Veterans like Naomi, Alicia Fox and Natalya also continued to impress throughout the last year. While they weren’t always the focal point, they put on fantastic matches every time they stepped in the ring. Not only fantastic matches, but longer matches, too. Naomi, Nattie and Fox don’t get much of the credit they deserve, but this year they have had some of their best matches. The same can be said for Summer Rae, who has consistently been a solid ring worker even though she spent the majority of the year in a managerial role.

Besides fantastic matches, Divas were given more in-ring segments and backstage interviews. We’re finally getting to know the characters behind many of the women, and because of that, they’ve gotten over. Charlotte has transformed from an awkward babyface saying “I…WANT THIS?” to a dominant and arrogant heel. It’s almost hard to believe she was once a face. Sasha has become beloved by the fans simply for playing a heel. Becky Lynch has reached new levels of popularity comparable to Lita in 2000 with her alternative character and punk feel. Even women like Naomi have grown in their new roles and it’s almost strange to believe they weren’t always this character.

In these segments, women have been able to break new barriers. Whether they’re making headlines like Stephanie McMahon and Ronda Rousey at WrestleMania, making their debuts in a talked about segment, making controversial comments like Paige or even celebrating the retirement of their husband in Brie Bella, the women were given opportunity and chances. They were given chances to soar and get the crowd invested and they were also given chances to take risks that sometimes don’t pay off. Successful or not, they took the risk and the WWE gave them the opportunity to take those risks. THAT is the big picture here.

So, how about that #GiveDivasAChance? A year later, we’re getting multiple Divas matches on Pay-Per-Views, actual Diva storylines and a guaranteed Divas Title match at WrestleMania. Finally, the women have received the respect they so deserved. There’s still so much more to do, but at the very least, we know that the WWE has finally decided to take a chance on the Divas.