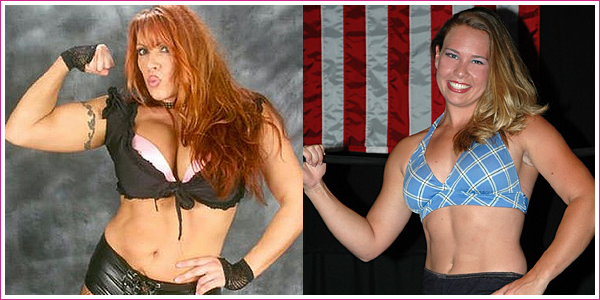 Two new names could soon be joining the Knockouts roster as TNA management is said to have been impressed by April Hunter and Lorelei Lee who wrestled at the New Year’s Knockout Eve taping a couple of weeks ago.

A source tells us that the taping was a tryout for the duo who wrestled against Knockouts Tag Team Champions, Sarita and Taylor Wilde. We’re told officials were ‘happy’ with the response both received from fans after the show aired on Thursday night. One talent told us that both were cordial and friendly backstage also.

TNA are currently looking to sign new talent as part of the ‘Hulk Hogan era’ and a lot of unsigned talent is being brought in for the tapings tomorrow and Tuesday night. It’ll be interesting to see if they end up backstage at either of the shows, it could be an indicator that they may be signed.

No word yet on the other two girls who received tryouts, Amber O’Neal and Lizzy Valentine.