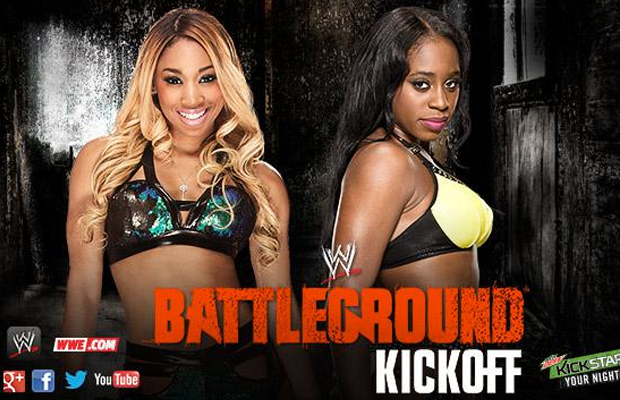 Tonight on Battleground Kickoff, Cameron and Naomi go head to head. Which Funkadactyl will emerge victorious? The Diva Dirt team weighs in:

Chris: A lot of people were upset that this was put on the pre-show but I feel that they will probably be given a little bit more time and not be stuffed between two main event matches. Naomi is always impressive and Cameron was improved tremendously in recent months, so I look forward to seeing what these two can out together, especially considering how much I have enjoyed their slow-burn feud. I’ve been conflicted on who’s going to walk away with the victory in this one, but I’m going to go against what many are probably thinking and say that Cameron will pick up the win using some sort of heel tactic.

Cryssi: I haven’t really kept up with Naomi and Cameron so some type of analysis isn’t what you’re going to get with this prediction. I would like to see Naomi pick up the victory but since I feel like that’s the scenario most likely to happen, I’ll go with Cameron for the surprise win tonight.

Eleri: I think Naomi has this one in the bag, and I’m all for it because I want to see a really scorned, pissed off Cameron chasing a victory going into SummerSlam. Naomi is far more experienced but Cameron has been working really hard to become a credible competitor. To be honest I’m just excited for the match. I feel they’ll have excellent chemistry in the ring. So for me, it’s Naomi and a prolonged Funkadactyl feud.

Erin: I don’t want this to be the end of the feud, but I’m not sure if it will if Naomi wins. Cameron picking up the surprise win would be more open-ended, but this feud has been built to make Naomi look very strong. So, I’m thinking that unless they’re looking to have a sketchy finish, Naomi is going to win. Who knows? Maybe a loss will inspire Cameron to get even more vicious towards her former partner. I hope so, because I just can’t see Naomi losing this one.

Jack: Cameron has no singles wins whatsoever coming into this match and with Naomi winning on Superstars, I am guessing Cameron is going to win this one to keep this going and light even more of a fire under Naomi. Naomi is confident now and said on Main Event commentary that she wants to move on from Cameron and head towards the title. With Cameron winning, Naomi will have to address this latest speed bump a little longer. Cameron wins with dirty tactics.

Steven: With the Funkadactyls officially done, I feel like the split is a bit uneven. Naomi is established as a babyface, while Cameron has to start from the ground up with her new heel persona. That said, I predict that Cameron will pick up the surprise win, and continue feuding with Naomi for the time being.

BREAKDOWN: 4 for Cameron, 2 for Naomi.