In the tournament to crown a new Interim PWWA Champion in Madison Eagles‘ absence, two competitors have advanced after having their first round matches April 21 at the Woy Woy Leagues Club.

Jessie McKay also picked up a victory after defeating Harley Wonderland with a Yakuza Kick.

The other two tournament matches have been announced, with New Zealand’s Evie taking on her partner-in-crime Megan-Kate, and Shazza McKenzie going up against Eliza Sway.

Who’s your pick for the winner?

That’s not all that’s been happening in Australia. Shazza McKenzie picked up the duke in a big grudge match with Sway on April 21 for MCW’s “New Horizons”.

Shazza will take on Kellie Skater for NHPW May 26 in Western Australia, battling it out for Skater’s IndyGurlz Australia Championship. 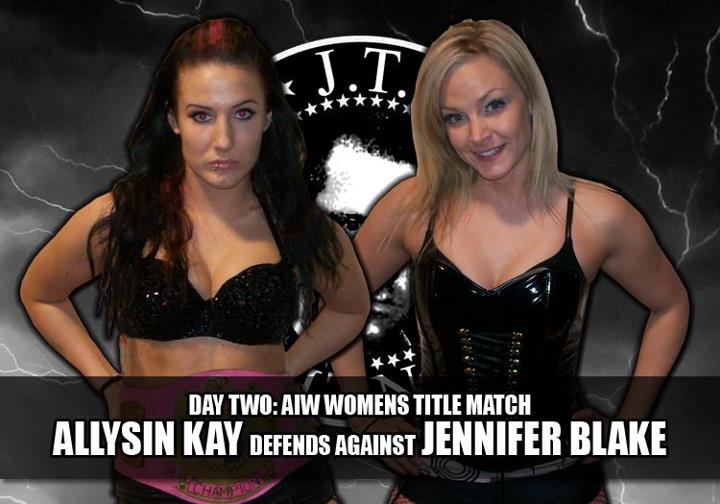 Allysin Kay will defend her newly won AIW Women’s Championship against “Girl Dynamite” Jennifer Blake in Cleveland, Ohio on May 12th for AIW.

Blake has been on a roll since returning from Mexico, and has been taking bookings left, right and centre. She followed up a victory over Jodi D’Milo on April 14 for WrestleStock with another over Kimber Lee for AIW’s “Girls Night Out 6” on April 15.

In an interview with SLAM! Sports, Jennifer says she’d love to return to SHIMMER Women Athletes.

“I’d love to do SHIMMER again. I always had fun working the SHIMMER shows and working the girls from North America. It’s always easier to put a match together with someone who speaks the same language as you. That’s always a treat, coming home and wrestling the girls.”

Blake also made mention that she’d like to make a few more trips overseas before she retires.

Sara Del Rey is set to face off against The Batiri member Obariyon on April 29 for CHIKARA’s debut in Indiana.

Speaking of The Batiri, their big announcement on Twitter included posting Del Rey’s home address and phone number on Chikara101.com.

Looks to us like The Batiri, whom have been taunting Del Rey for months on the popular social media website, must have a death wish…

While on the subject of CHIKARA, the first announced match for their big 10-year anniversary shows on May 19 and 20th involves none other than the Sendai Girls themselves: Meiko Satomura and Kagetsu will team up to take on Dash Chisako and Sendai Sachiko on the 19th in Easton, PA.

They’ve also released a small teaser clip about Satomura making her debut in the USA.

Davina Rose will debut for Canada’s ECCW this Saturday in Surrey, taking on KC Spinelli for her Women’s Championship.

Spinelli most recently defended her gold against Nicole Matthews on April 14, in what was described as a very “back-and-forth” match.

Matthews and her stable The RIOT will also be in action, defending their tag team titles.

Ice Ribbon held two-days worth of shows on April 20 and 21, both held at the Warabi Dojo in Saitama, Japan. The Friday event was for their 19 O’Clock Pro Wrestling show:

The Saturday event was New Aisuhiro #382. Check out results below:

Mia Yim will make her way back to Japan in May. Her return match is for REINA’s anniversary show at the famed Korakuen Hall on May 13. Yim will team up with Aoi Ishibashi to take on Kyoko Inoue and Sareee.

CZW graduate and rising star Kimber Lee will also be making her Japanese debut on this show. Congratulations to both women!