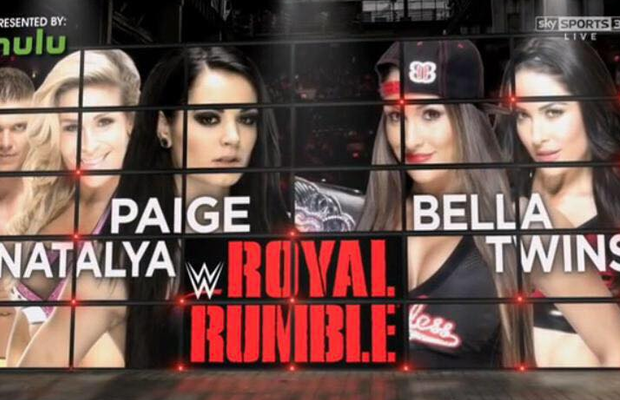 Tonight at the Royal Rumble, Brie and Nikki Bella team up to take on Natalya and Paige. Will the Bellas or the Blackharts prevail? The Diva Dirt team weighs in:

Adrian: I don’t watch Total Divas so I have no idea what’s going on here (if none of this has anything to do with Total Divas, I apologize), but I’m sure I can join the dots. Thing is, it’ll probably be a really solid match until the finish, but then there’ll be some hilarious moment of “miscommunication” between Paige and Natalya causing Brie & Nikki Bella to roll one or the other up for the win. Then Paige attacks Natalya post-match while Tyson Kidd does something nonchalant and cat-related, like curling up on the Spanish announce table and licking himself clean.

Bobby: Meh. I have pretty much moved on to other outlets for my women’s wrestling fix during the past few months because, honestly, as much as I’m a fan of most of the women (and Tyson!!) involved in the feud, I just can’t make myself care about it. That plus Brie Bella going from basically co-main eventing SummerSlam to this secondary catty heel character depresses me any time I try to watch her. For real. I can’t make it through a match or segment she’s in anymore without feeling sorry for her and so I just stopped watching altogether. I love the Bella Twins, and I like Nikki being the center of the division, but Brie turning heel is so mindblowingly stupid to me that I can’t believe it’s really still a thing. As far as the match is concerned, I’ll go with Natalya & Paige winning because I want as many Tyson Kidd celebrations to exist as possible. Oh and they kind of should establish a contender for Fast Lane. I hope it’s Paige because she’s my favorite Diva on the main roster at the moment and, of the two, I find her to be far more naturally likable to get behind. To me, she’s the perfect Diva to be at the forefront going into Mania considering how much of the past year has been comprised of she, AJ Lee and the Bellas, and I think it would be a travesty for as many of those four as possible to not be involved some way or another.

Chris: Although I wasn’t quite expecting a tag team match I’m interested to see what Paige and Natalya can do as a tag team. There’s been hints of some tension between the duo as it relates to Nattie’s husband, Tyson Kidd. I think Tyson will provide a distraction causing miscommunication between Paige and Natalya, which will allow Brie & Nikki Bella to pick up the win.

Erin: I feel like this is a roundabout way to push Paige back into the Divas Title picture without giving her a title shot yet. I’m sure she’ll factor into the title feud when WrestleMania rolls around, so though a tag match at a PPV seems like a cop-out, it does serve as a stepping stone to a Paige/Nikki feud. That feud will likely morph into an AJ/Paige/Nikki feud between now and Mania, but for now, Paige needs to look like a strong contender. A win tonight gives her a bit of an extra push without taking the title from Nikki. That’s why I think Natalya & Paige will pick up the victory tonight. Bonus points if the loss causes any sort of tension between the Bellas.

Jack: With Paige and Natalya not exactly seeing eye-to-eye, we could see some interesting tension between them in this match. Both will wan to prove they’re the better Diva, and rightful #1 Contender. As I also mentioned in the Raw Redux, with Tyson Kidd at ringside, things become slightly more unpredictable. And when was the last time we got a normal tag match on a Pay-Per-View? Perhaps WWE’s booking is lazy (most likely) or perhaps they are throwing a curveball here. They are expecting us to be underwhelmed (we are) and then we’ll be eating our words after something interesting or shocking happens and/or the match is outstanding. I’m going to try and be positive and I’m glad Natalya is getting a chance to shine on PPV. Of course, I’m super buzzing that Paige has made it onto another PPV too. With all of that being said, I see Paige and Natalya winning otherwise what would be the point? A potential title contender wouldn’t have been established and Nikki’s bland reign would continue. It won’t be easy as Natalya & Paige fight for supremacy, yet they will pull it out of the bag in the end.

Josue: While it is disappointing that there will be no Divas Title match at Royal Rumble, I think part of the reason stems from WWE not fully building up any real contenders to take on Nikki for her title. As with Brie a few months ago, both Natalya and Paige seem like qualifying candidates but there still feels like something is still missing. With Royal Rumble being the start of the “road to WrestleMania”, I’d like to see WWE begin setting the pieces for their WrestleMania Divas match through this tag match. I say Natalya & Paige for the win after teasing some newly reformed sibling rivalry between the Bellas.