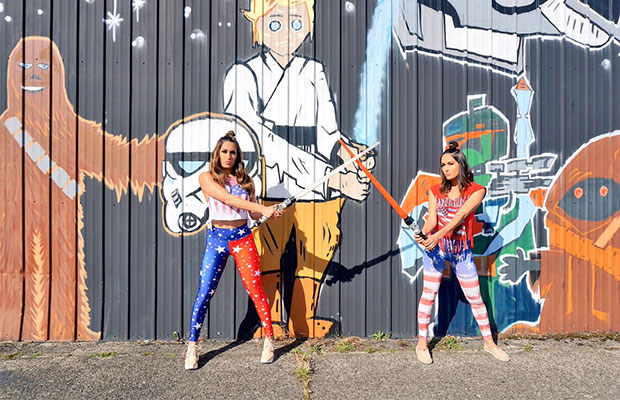 The week started off with some great 4th of July celebrations:

May the 4th be with you ????? Everyone have a safe & happy 4th of July! Happy BDay America! Let freedom ring! B&N pic.twitter.com/WRKdgI7VuZ

Naomi posed in the new top she received from Brie Bella:

Vickie Guerrero thanked the fans and her WWE family after her RAW return on Monday:

Tonight was great being surrounded with my 2nd WWE family! EVERYONE LOOKS GREAT AND MISS YOU ALL!

A few of our favourite women’s wrestlers celebrated #NationalBikiniDay:

Did someone say that it's #nationalbikiniday ? Here's an oldie from a @wwe photoshoot.

I hear it's #NationalBikiniDay… So here ?

Gail Kim looked back at her very first steel cage match that took place against Jacqueline:

My very first steel cage match with Jackie Moore. I literally begged for this match to happen and yes I jumped! I always say wrestling is the only thing that makes me cry in this world lol and I literally cried from happiness. Memorable moment for me. Since then I've had countless steel cage matches. And streetfights and ladder matches and many others. #tnaknockouts #impactwrestling #WrestlingWednesday

Wrestlers like Summer Rae and Jade shared their thoughts over the recent US shootings:

Natalya shared this BTS image of her and the Bella Twins whilst filming Total Divas:

Bayley returned to Fort Pierce, Florida this week and felt very nostalgic about it:

Fun fact about #NXTFtPierce: My first match in this building was in Jan. 2013 where I teamed with @SashaBanksWWE. We were not victorious.

WWE Hall of Famer Trish Stratus had some fun picking berries with her child this week:

Can't get any fresher than picking ur own berries! S/O to our berry concierge/driver Jordan??https://t.co/7gRhFWsDF5 pic.twitter.com/ASW6mktmhN

Emma had some fun in NYC with Zack Ryder:

Nikki Bella shared this sneaky tweet a few days ago, indicating towards her return:

Paige took to Instagram to proclaim her love for her boyfriend Alberto Del Rio this week:

Melina geared up for her in-ring return:

I have to admit, I'm a bit nervous to get back in the ring, but DAMN, this feels right. pic.twitter.com/awWYwCZWHz

Some celebratory tweets for Brock Lesnar’s UFC return were shared with us this week:

Nia Jax on the other hand, couldn’t help but be in awe over Sable:

And finally, Lana, Renee Young and Naomi had some fun filming Total Divas this week: