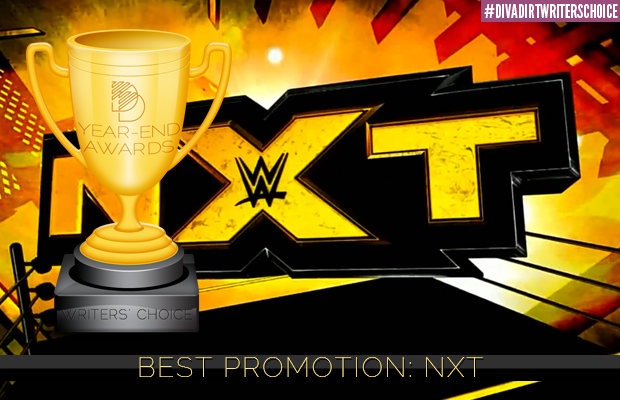 For the second year in a row, NXT has proved that future of the WWE is bright. And that the future is now. In 2014, we saw the women’s division’s development into a major draw of the promotion. A year later, these women are the draw.

In the beginning of this year, we saw the NXT Women’s Champion Charlotte‘s feud with her former best friend Sasha Banks explode into a four way feud featuring Becky Lynch and Bayley culminating with The Boss winning the NXT Women’s Championship at the NXT Takeover: RIVAL event in February. Like so many times before, the women stole the show.

Sasha Banks spent her 2014 defining her Boss character, tweaking the things that worked and the things that needed to be erased. In 2015, she changed her hair color, modified her move-set and quickly became one of the most marketable performers (male or female) in the WWE. 2015 became the year where Sasha Banks reaped the rewards of the hard work spent in promo class with the late Dusty Rhodes, her classes with Sara Del Rey (Amato), and paying her dues from jobbing almost every week in 2014 by becoming the most intriguing woman in wrestling in 2015.

A Diva who couldn’t really say the same was Becky Lynch. She was a victim of “Creative’s got nothing for you,” getting stuck with an awful Irish gimmick, to getting a theme music change but not much more, to turning heel and playing Sasha Banks’s lackey. But that all changed in the spring of 2015. After her alliance with Sasha Banks imploded, Becky would defeat Bayley and Charlotte to become the number one contender for the NXT Women’s Championship. A heated contract signing end with a DisArmHer left Becky as newly found face and a woman looking to make her mark competing in her first one-on-one match at a Takeover.

When the former two members of Team B.A.E. clashed at NXT Takeover: Unstoppable, it was by far one of the most intense matches in the history of the WWE. Before the match, Becky made her entrance with new hair, new gear and added steam to her entrance. The crowd loved this new Becky Lynch and the “Powers That Be” had their faith in her to be given such a transformation for a live special. The match was a treat for submission based wrestling fans as both women destroyed the arms of each other. The finish of a top-rope Banks Statement looked devastating as Becky fought out and ultimately tapped out. Although Sasha won the won, the real winner was Becky Lynch who after the match, the often vicious Full Sail crowd serenaded Becky’s entrance theme to her as she walked to the back. Even in a loss, a star was born. Becky Lynch became a pillar of the NXT Women’s Champion.

NXT Takeover: Unstoppable proved to be one of the major nights of the NXT Women’s division. Also that night, Dana Brooke debuted at a Takeover. The Total Diva started off rough, with no real sense of direction but found some traction when she found her ally Emma who came back to NXT to revitalize her career. In one of the most shocking moments of the night, Alexa Bliss turned heel by aligning with Blake and Murphy to cost the mega over Enzo, Cass, and Carmella out of the NXT Tag Team Championships.

The summer of 2015 proved to be a crossroads for the NXT Women’s division. Three out of the Four Horsewomen, Charlotte, Sasha Banks, and Becky Lynch debuted in one of the top RAW segments of the year. This left NXT without the biggest women in their division, and Bayley as the sole Horsewomen to continue making strides for women’s wrestling at NXT.

NXT capitalized on this by creating a storyline where Bayley stakes her claim and seriously challenges for the NXT Women’s Championship. The fans were ready. The world was ready. Bayley’s time was now. With major wins over Charlotte and Becky Lynch, Bayley finally had the momentum as the number one contender.

August’s NXT Takeover: Brooklyn set the stage for one of the biggest matches and storyline climaxes in women’s wrestling history. Sasha Banks came out in a limo with bodyguards, an entrance fit for a main eventer at a WrestleMania and Bayley’s Dusty Rhodes tribute attire set the tone for an emotional night. Over twenty-two minutes of reversals, amazing heel tactics from the Champion, and the craziest reverse hurricanrana I’ve ever seen set the scene for the Bayley-To-Belly allowing Bayley to finally reached her zenith. The former joke of the division, the jobber, the character that nobody understood at first was now the most over woman in the WWE and finally the NXT Women’s Champion. Minutes later, social media blew up. And the wrestling world agreed. Male or female, THIS was the match of the year. The emotional curtain call of the Four Horsewomen truly proved to be the end of an era. This was like a dream to fans of the WWE Divas. This match and moment was worth all of the heartache and disappointment done for years. This was all we’ve ever wanted.

Like most Takeovers, there are other nuggets for the women to shine. Alexa Bliss cut a heel promo on a live special and got heat with the fans in Brooklyn. (Yes, you read that right.) The Vaudevillains got reinforcements to combat Alexa’s tricky ways with the uber over Blue Pants who got one of the largest pops of the night. Who would have thought Leva Bates would have become the most over jobber in WWE? That’s no insult, that’s a testament to how important NXT makes each and every woman. Another spotlight was Joshi legend Kana in the audience with WWE Hall of Famers get an on screen cameo.

The fall of 2015 proved to be a new world for the NXT Women’s Division and three-fourths of the Four Horsewomen were on the main roster. Bayley was the new champion, and most fans were wondering what would be next. Some fans even thought that the demise of the NXT Women’s Division was imminent. That wasn’t the case as the next wave of NXT Divas would stake their claim to continuing the legacy of amazing women’s wrestling. Alexa Bliss worked a great short-term program with Bayley. Dana Brooke and Emma continued to add layers to their characters and their teamwork. And a returning Eva Marie, would show considerable improvement in the ring, even taking Bayley to the limit in a NXT Women’s Championship match with her new gimmick of being the “Chosen One ” from the “Powers That Be”.

October’s NXT Takeover: RESPECT would prove itself to continue adding on the momentum of the year. Kana debuted as Asuka and demolished Dana Brooke in the process. The reaction for her was insane, an in another Takeover match, bit the winner and the loser earned everyone’s respect. Dana was no longer the butt of a joke, she became one of the NXT Divas to watch in 2016.

Sasha Banks and Bayley would settle the score in a match that would make history in more ways than one. These women would compete in the MAIN EVENT of a WWE special. Not only that, but the most anticipated rematch of the year would be in a 30 minute Iron Man match for the NXT Women’s Championship. This match was stellar. Sasha using Izzy, Bayley’s biggest fan as a pawn in the match taking on her headbands to honor her hero and mocking her drew the ire of the Full Sail crowd. Back and forth, these women waged war, and ended with Bayley winning via submission with a final score of 3-2. The post-match was were the emotion took over. The entire NXT locker room stepped out to congratulate these women and the man behind NXT, Triple H handed both women flowers. It was something from classic Joshi matches in Japan from the 1990’s. It was the final stamp on the fact these women are the draw.

The end of the year has proven that NXT is in good hands with this newer crop of women. Nia Jax is breaking the mold in so many ways and impressed in her Takeover match against Bayley at the NXT Takeover: London. Her look is so unique and voice is like something from a dream. Peyton Royce and Billie Kay are finding themselves and helping in their own through the house show loops. Eva Marie is the most heated woman in NXT and owning her new gimmick. Carmella has stayed consistent as one of the most charismatic Divas in NXT. Alexa Bliss turned heel and the world did not end. Bayley is staying strong as the standard bearer and leading the next wave brillantly. We may not have the LassKicker, The Boss, and a Genetically Superior Diva but the NXT Women’s Division is in great hands. This time next year, we will reveling in the growth and new heights that 2016 brings the NXT Divas.

The ideal promotion for women’s wrestling fans is to present the women as equals to the men. To create intriguing, captivating characters that leave fans emotionally invested in the highs and lows these women face. Women that draw the respect of the crowd with every move and every promo. To push the boundaries of what the role of women in the industry is. Tos pit in the face of gender roles that have left these women in chains for decades. In short for WWE Divas fans, to #GiveDivasAChance. NXT did this and more. They hit it out of the park. Here’s to what 2016 will bring to NXT.