Money in the Bank Predictions: Paige vs. Naomi for the Divas Title 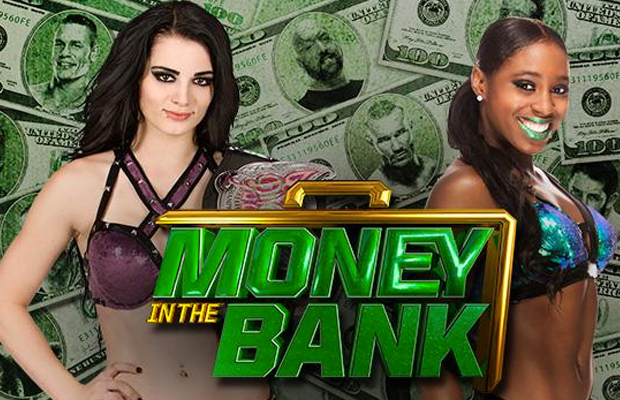 Tonight at Money in the Bank, Paige defends the Divas Title against Naomi. Will Cameron‘s presence work in Naomi’s favor? The Diva Dirt team weighs in:

Bobby: I absolutely can’t wait to see this match. WWE tends to always do shorter built Divas Title feuds better than ones that have weeks upon months to go from, and this is definitely another case of that because the past two weeks Naomi and Paige have had to build this has already got me invested about what’s going to happen. I love that this is something different for the Divas, in that we don’t just have Diva A becoming #1 contender and Paige wrestling them on a PPV, but also the addition of Cameron and the curiosity surrounding if either or both of the Funkadactyls are gonna turn heel. I love my Naomi and I vowed to always pick her in any PPV prediction thread, but I think Paige needs a few more months in her reign so I’d love to see this feud continue on where Naomi eventually is the next in line. I’m doing this to help you Naomi! Don’t hate me but I choose Paige.

Chris: This has the possibility to be one of the best Divas matches of the entire year. Both of these girls are awesome technically and I can’t wait to see what these can put together on Pay-Per-View, especially considering how much I loved their encounter on Main Event. The most interesting part of this entire situation to me is the roll that Cameron will play. I see Paige retaining via Cameron turning on her Funkadactyls partner.

Cryssi: I’ll be the first to admit that I haven’t really kept up with the build-up to this match, but I will say that we will all probably agree with the predictable outcome. No doubt this match is just a filler to highlight the split between the Funkadactyls, and Cameron is going to end up costing Naomi her championship shot. So, hijinks at the end. Hopefully, before it all breaks down at the end, Paige and Naomi put on a clinic. I can’t wait to see how they work together on a pay-per-view and they’re both so skilled. I want a good, solid match. Lots of back and forth action. Paige will win and retain her championship, and we will get Naomi versus Cameron down the road.

Eleri: The brewing feud between Naomi and Paige has me all kinds of excited, but I’ve a feeling the stand out of the whole thing is going to end up being Cameron. I fully expect her to interfere and cost Naomi the match tonight, leading Paige to pick up the win and retain her title. A Funkadactyl feud is pretty much assured, but where might that leave Paige, now that Alicia Fox appears to have been derailed? I say book a triple threat for SummerSlam. Paige vs. Naomi vs. Cameron, and have Naomi win the belt at the biggest party of the summer.

Erin: Even though she has the numbers advantage, having Cameron in her corner, Naomi just doesn’t have the momentum that would lead to a Divas Title win. That’s not even mentioning the fact that Cameron seems primed to turn heel, and undoubtedly Naomi would be bearing the brunt of that turn. Unfortunately for her, I see that happening tonight. Frustrated that she’s not the one fighting for the title, Cameron will cost Naomi the match, allowing Paige to retain the title. Hopefully, this will lead to a feud between the two. Though, I’d take a Triple Threat match too, now that I think about it.

Jack: As much as I would like to see Naomi also turn heel along with Cameron and capture the title, I think WWE are just going to go down the Cameron heel turn route. I predict that Paige will yet again tear the stars out from the sky and bag the win due to Cameron screwing Naomi. I imagine Cameron may attack Paige, meaning Paige wins by DQ maybe yet I’m not so bold as to predict that fully so I’m just going to say Paige wins in any way so I can get that point on the Diva Dirt prediction scoreboard. And yes, I am the only person who is bothered about winning that!

Steven: Diva fans (myself included) have been itching for Naomi to get a shot at the title for ages. She is often touted as the most athletic Diva on the roster and it’d be great to see her as the face of the division. Under normal circumstances, I’d say she has a pretty good chance to win the title. However, with the tension between her and her partner Cameron, I expect Cameron to cost her the match, effectively ending the Funkadactyls. Paige retains and moves into the next challenger, and Naomi and Cameron have a feud of their own.