Payback Predictions: Paige vs. Alicia Fox for the Divas Title 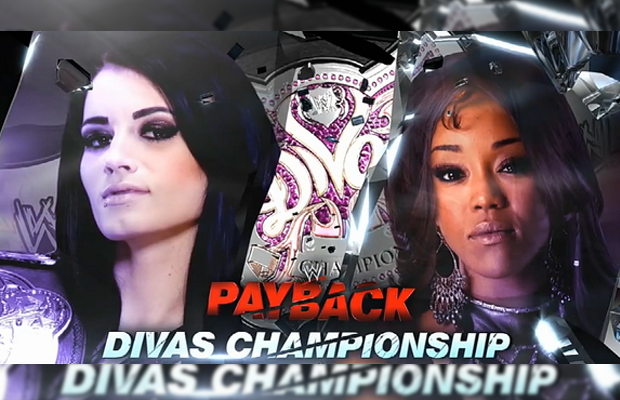 Tonight at Payback, Paige defends her Divas Title against Alicia Fox. Will Alicia’s new attitude propel her to the championship? The Diva Dirt team weighs in:

Bobby: I’m actually really looking forward to seeing Paige and Alicia square off on a big stage, and that’s not something I usually say about a match that’s been repeated countless times. The difference here is that this one feels special and built up pretty well, even if the actual interaction between the two hasn’t been too out of the box when it comes to a Divas feud. It’s just like I kind of think after how small the build to Paige’s match with Tamina Snuka was, this feels way better in comparison to me at least. Foxy has been a storm of entertainment and it’s been amazing getting to see her be allowed to shine again like we all knew she could, but I just don’t think you can have Paige drop the title just yet which kind of saddens me because the WWE seem to be putting way more into Alicia than they are her and I think it’d be a much better feud if we saw Paige fight for the title instead of constantly beating everyone to defend it. Regardless though, I’m picking Paige to win and praying this isn’t the last we’ve seen of crazy Fox. Even if she’s not in the main title feud, she should at least be given a secondary role considering her meltdowns are getting a ton of heat and she’s found a connection to the fans that a lot of people haven’t got, especially for being a heel.

Chris: I’m really pumped for this match even though I think it’s super obvious who is going to come out with the victory. Alicia Fox has been the most entertaining character in all of wrestling for me in the past month, and a rivalry with Paige was completely unexpected but very much welcome. I’m interested to see what these two will do on a PPV, especially after Takeover on Thursday and since they will be in front of a hostile crowd in Chicago. Alicia will put up a fight but I’m expecting Paige to walk away still the Divas Champion.

Cryssi: Honestly, this is one of the few matches that either lady could pull out a victory and I would be happy. Alicia Fox and Paige have put together one of my favorite feuds in recent memory. Alicia is killing it with this new found personality; she’s absolutely hilarious. Paige is the newcomer, the surprise champion, and the girl with the target on her back. She needs to continue picking up victories over these veteran girls, which is why I see her walking out of the Chicago still Divas Champion. She needs to have a credible title run, with entertaining programs and thus far, they are doing her justice. Every single match Paige and Alicia have put on has been fantastic and I’m definitely hoping they have saved the best for last. It’s been a great week to be a Diva thanks to Natalya and Charlotte stealing the show at NXT Takeover, and tonight will be no different thanks to these two fantastic performers.

Eleri: Surely WWE aren’t going to have Paige drop the belt this early? Alicia’s doing everything right at the moment but I can see her uneven temper costing her the win here. I’m all for this feud continuing so I see Paige retaining and Alicia staying in pursuit of the title.

Erin: While Paige hasn’t exactly been getting the focus of the feud, I see no reason for her to drop the title. She’s still in the process of being built into a strong, resilient champion, and I see Alicia and her new “wild card” status as another hurdle to jump. She overcame the physical challenge in Tamina, and by overcoming the mental challenge that Alicia presents, she’ll show her fellow Divas that there’s no longer any reason to underestimate her. Thus, Paige retains.

Jack: P-P-Party! I used to hate Alicia having to put up with Maria Kanellis‘s recycled theme song yet now that she’s batshit crazy and bipolar-ing it up, the fact it doesn’t suit her at all means that it kind of now does suit her. Anyway, ignoring theme music and back to the original point I was going to make, I may actually have a p-p-party when this match is on as I am massively looking forward to it. Alicia is the best thing in the WWE right now with her hilarious “GIVE ME ALL YOUR MONEY” and soda shower meltdowns and I am loving it. After seeing what happened on SmackDown too, I like that although small, they added another dimension to the early stages of this feud. It’s now not just “I pinned you, I deserve a shot” – Alicia ramped up the personal as she tried to cost Paige her match. The last four matches between Alicia and Paige have all been highly entertaining too, so now that it’s on a special event with the belt on the line, I’m hoping they can outshine their previous efforts due to having more time to work. Do I think Alicia will win? Hell no. Yet I don’t think this story is over yet either. I predict Paige retaining, possibly with a reversal or roll-up and not decisively, allowing Alicia to go cray cray again and beat the living day lights out of her like Paige was Jay Z in an elevator. Paige win, yet the feud continues.

Steven: Alicia vs Paige is a hard match to call. On one hand, Alicia has taken the division by storm with her antics in a matter of weeks, while Paige had done the same, putting herself on the map with her surprise title win. I love both of these Divas, and hate to have to choose between them, I feel like Paige dropping the title would take a lot of the wind out of her sails when it comes to being a credible champion. Alicia has made herself stand out, so win or lose, she comes out a winner. That said, I see Paige retaining, Alicia becoming even more unhinged, culminating in a rematch at the next PPV.

BREAKDOWN: 7 for Paige, 0 for Alicia.