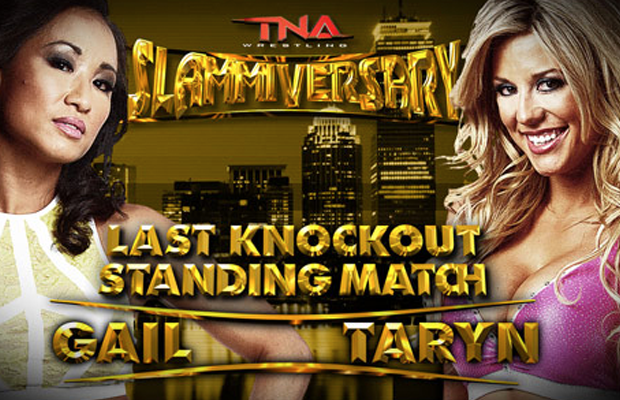 Tonight at Slammiversary, Gail Kim and Taryn Terrell will fight to leave the other lying in a Last Knockout Standing match. Which Knockout will be left standing? The Diva Dirt team weighs in:

Bobby: First off, I like that the Knockouts are getting such a unique stipulation added to their match at Slammiversary. I know it’s happened before in their division, but at least it’s not recent enough to take anything away from the fact it’s happening for Gail vs. Taryn. When it comes to a winner, I feel like something out of the box will happen and Taryn may take it home. The stipulation could allow for a more believable way (considering Gail’s length of experience in comparison) for Taryn to win. I also feel like Gail’s pretty much going into a three way feud with Mickie James and Velvet Sky over the title soon, and this would give Taryn a valid reason to insert herself into it and make it a four way. You’d have Gail as a heel who feels she did all the work in making Velvet’s knee weaker allowing Mickie an easier win, Mickie as a tweener champion looking to defend the belt and prove it was no fluke, and both Velvet and Taryn as faces with either a rematch clause or a big win at Slammiversary so I really think it could lead to fun things.

Chris: Both ladies have had momentum on their side as of late, Taryn has constantly been proving herself with some big wins as of late, While Gail has shown a more vicious side then ever before. We’ve seen that Taryn also has a mean streak in her but is it quite the level of Gail Kim’s?, Especially in only the second ever Last Knockout Standing match? I don’t think so. I’m going with Gail to win and move into the title hunt.

Cryssi: Is this a title match? Who’s the champion? When was the last time I watched TNA? Is it still even called that? Why am I questioning everything? Does my opinion in this even matter? Am I qualified to even answer this? Can the answer to all these burning questions be summed up in one answer? YES!!! And what’s that answer?? I don’t have a clue. So I guess my prediction is this; Gail Kim, meh. Taryn, last I checked was a referee. So I could go out on a limb and be obvious and say Gail will win. But because I am me, I’m going with Taryn. Anyone who was once referred to as Skirt Tiffany deserves to win everything in my opinion and like always, my opinion is the only one that matters. Your Khaleesi has spoken.

Eleri: I’m going with my gut on this one and going for Gail. She has the experience and she’s been very vicious lately, and while Taryn has been aggressive, I think Gail has the edge in this one. Taryn’s still new to the Knockouts roster, and I’m not taking anything away from her, but I think that her inexperience will play a part in how she matches up to Gail on Sunday. Given the fact that Gail has been in some tough rivalries before (see Awesome Kong), I think she’ll have the experience needed to conquer Taryn this time around.

Erin: This whole feud is showcasing Taryn’s shift from referee to wrestler, and she’s certainly got the “feisty underdog” thing going on. Both of those indicate to me that Taryn’s the one that would benefit most from winning this match. As there’s no title on the line, there’s nothing saying that Taryn can’t pull off the win. And, as it’s a Last Knockout Standing match and not a straight-up wrestling exhibition, Gail can handle the loss without it de-legitimizing her. I see the stipulation as an opening for Taryn to get an important, profile-boosting win, so I think she’ll take it.

Jack: I think this match will be a no contest. With Gail being given a new, more vicious direction in character as of late, I see that building to something, and a loss would dampen that. In saying that, Taryn Terrell is a new face to the division and is being promoted well and I see her going up against a rumoured-to-be-turning-heel Mickie James. Her and Gail’s feud could easily continue with Mickie involved and it would freshen up Gail vs. Mickie, which has been seen a lot already.

Jake: As much as I’d love to see Gail get the win here, I have a feeling Taryn will somehow pull out a victory. She’s on a hot streak lately and I wouldn’t be surprised to see Tara interfere to get some payback from a few weeks ago. Taryn is my prediction but I hope I’m wrong… mainly so I don’t have to hear her crappy theme music twice. ShEz a h0t Me$s!!!!

Katelyn: I pick Gail to win, but I’m fully expecting Taryn to put in the performance of a lifetime.

Melanie: This is a very interesting match choice and I’m actually really excited to see how the Knockouts pull it off because it could make for a really hard fought match, perhaps with the pair battling around the arena trying to knock each other out. That’d be pretty cool! Taryn came a long way in a short period during her WWE run so it’ll be interesting to see how she fares in a big pay per view match. That said, I still have Gail for the win here.