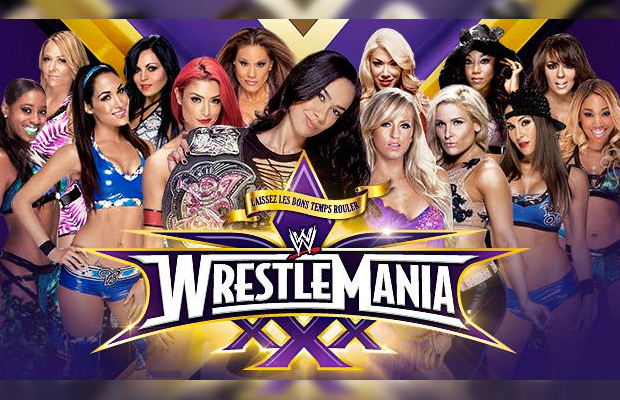 Tonight at WrestleMania 30, AJ Lee will put her Divas Title on the line in the “Vickie Guerrero Invitational”. Will AJ beat the odds yet again? The Diva Dirt team weighs in:

Adrian: Having watched the sheer brilliance from start to finish that was SHIMMER 62 last night, this is just upsetting. Maybe I should be glad the Divas Championship is finally being defended at WrestleMania for the first time, or that the Divas are getting a match at all, but I just don’t see a one-fall match between fourteen women being a positive advertisement for the division, or women’s wrestling in general. Who’s going to win though? There aren’t many women on the roster who deserve it to be honest, but if AJ’s reign is destined to end tonight then my money’s on Summer Rae. Her ring work’s decent and she’s one of the few Divas who have actually gathered any momentum over the past couple of months. It seems like the powers that be are behind her, so why not?

Bobby: Well, here we go! To say I’m a ball of nerves would be an understatement, but I’m beyond ready to see how this title match goes down. Would I be happy seeing just about anyone win? Yes. In fact, if my first pick doesn’t take it I would probably be the most happy to see Eva Marie emerge champion and I’m not even joking or being sarcastic. But as far as my one and only goes, it should come as no surprise to see it be Naomi. It’s cliche to say it I know, but I have legitimately been this woman’s biggest supporter since the second I saw her burst onto FCW in a damn Christmas segment where she sat on Abraham Washington‘s lap and was told he wanted to stuff her stocking *shudders*. To see her win the Divas Championship at WrestleMania after ALL we have been through between FCW, NXT, waiting for that 13 month call up, her moment getting taken away last year and nearly taken away again this time because of an eye injury… it would be something I don’t think could ever be topped in my eyes, no matter if the match is great or horrible. I have no idea if they’re going to pull the trigger on her yet, but that makes it all the more exciting (and all the more nail biting)! Needless to say, I’m likely going to suffer multiple panic attacks watching this match, and may the best woman (who just released her new single, “Dance All Night”, which you can buy on iTunes now) win.

Chris: Woah! Feels like we were just covering WrestleMania 29 in NJ! It’s hard to believe that we are at the 30th WrestleMania and we have a HUGE (literally) Divas Championship match! Finally the title is on the line with the reigning champion, AJ Lee holding the title for almost a year now. It’s a fitting time for the Divas Championship to be defended and with every single Diva in the match it’s sure to be mass chaos! But hey, it’s WrestleMania! Personally, I would LOVE to see Brie Bella walk away with the championship. It would be a incredible moment to see both Brie as well as Daniel Bryan to walk out of the biggest show of the year both with championships. Hopefully this WrestleMania will belong to #Braniel!

Eleri: I really hope this is when AJ will drop the title. Her reign has been impressive but it’s time for some new blood, and WrestleMania 30 is the perfect opportunity. My pick for the win is Naomi. She was built up as a competitor before that horrendous knee to the eye (dammit, Aksana!) and I think they could have gone all the way. If I’m wrong, I hope it’s one of the Bella twins. I’d be happy with any of the three, but I’m going with Naomi.

Erin: This “one fall to a finish” stipulation makes me think some shenanigans are afoot. I get the feeling that someone is going to pull a swerve to eliminate the 12 other women in the match and bring it down to a one-on-one situation. That woman, I believe, is Tamina Snuka. All of this Tamina vs. AJ stuff they’ve been pulling as of late seems a little to convenient to me. Personally, I think it’s a ruse concocted by AJ and Tamina, fooling their fellow Divas into thinking AJ is well and truly alone. That’s not going to be the case, of course, because Tamina is still in her pocket. Tamina will appear to be bee-ling towards AJ, taking out countless Divas to get her alone – or close to alone. I envision It coming down to AJ, Tamina and one other Diva (Naomi?) who receives a surprise Superkick. Tamina will then allow AJ Lee to pin the fallen Diva and retain the title, turning AJ from a cowardly heel into an evil genius.

Jack: With so many possibilities, it’s bloody difficult trying to predict who will win. Due to in-ring performances, Total Divas and other outside influences, I think either AJ, Tamina Snuka, Brie Bella, Nikki Bella, Naomi or Raquel Diaz can win the match. Weighing all the options up, I think Tamina will walk out with the Divas Championship. She’s had some major victories in the past few weeks, and the camera has been constantly eyeing up her reactions when it comes to AJ. She’s looked overjoyed on Raw and the WWE App at being placed into the match and she hasn’t exactly been playing happy families with AJ in the ring and during post-match celebrations. On top of all those factors, I see Tamina’s involvement in the upcoming Hercules moving starring The Rock playing a major help in why she should win. WWE would be ridiculous not to reference her involvement and with a split from AJ teased, I think now would be the right time to pull the plug on a face turn and give her the championship. She isn’t getting any younger and with her role as AJ’s bodyguard finally proving that she is worthy as a spot as a WWE Diva, I think WWE should bite the bullet and take a chance on Tamina.